Cairo — Libyan officials in the capital of Tripoli said Sunday that overnight airstrikes hit a key military base on the city’s outskirts that was recently retaken by Turkey-backed forces.

A spokesman for the Tripoli-based forces, Col. Mohamed Gnounou, said the strikes were carried out by “foreign jets” allied with military commander Khalifa Hifter. 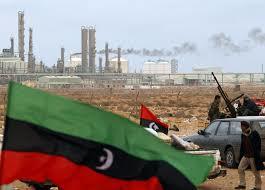 Hifter’s forces are backed by the United Arab Emirates, Egypt and Russia, while Tripoli is backed by Turkey, Qatar and Italy. Libya has been divided between these two rival governments since 2015 — one in the east, allied with Hifter, and the U.N.-supported government in Tripoli.

Many of these foreign backers are apparently jockeying for influence in order to control Libya’s oil resources, the largest in Africa.

The airstrikes late Saturday on the al-Waitya airbase in the desert southwestern of Tripoli destroyed military equipment recently brought in by Turkey, including air-defense systems, according to officials in Tripoli. They spoke on condition of anonymity because they were not authorized to brief the media.

An official with Hifter’s forces, Brig. Gen. Khaled al-Mahjoub, said at least nine targets at the base were hit.

Turkey’s Defense Ministry said in a statement that the airstrikes damaged some systems at the base, but did not elaborate on what kind of systems.

The Tripoli-allied forces had wrested control of the base in May after launching weeks of attacks using Turkish-supplied drones. Turkey has also deployed thousands of Syrian mercenaries including militants affiliated with groups such as al-Qaida and the Islamic State to fight alongside Tripoli-allied militias. On the other side, there were hundreds of Russian mercenaries fighting with Hifter’s forces.

Capturing al-Waitya was a heavy setback for Hifter’s forces, which had to retreat in early June from most of the areas captured in their yearlong offensive on the capital.

The Tripoli-based forces are now threatening to retake the Mediterranean city of Sirte — birthplace of former dictator Moammar Gadhafi, who was ousted and killed in 2011. Capturing Sirte could allow them to gain control of oil fields and facilities in the south that Hifter had seized.

Egyptian President Abdel Fattah el-Sissi warned over the weekend that any attack by the Tripoli forces on Sirte or the inland Jufra air base would amount to crossing a “red line.” He said Egypt could intervene militarily to protect its western border.

The airstrikes came after Turkey’s Defense Minister Hulusi Akar and the chief of military staff Yasar Guler made a surprise visit Friday to the war-torn Libyan capital, where they met with Tripoli-based Prime Minister Fayez Sarraj and other officials.

Sarraj’s office said they discussed military and security cooperation between Tripoli-based government and Turkey. It did not elaborate further details.

Meanwhile in the eastern city of Benghazi, thousands of Libyans protested Sunday against Turkey’s military intervention on the side of Tripoli-based administration.

“We are against the Turkish conquest, and against the Government of National Accord in Tripoli, and, God willing, we will be victorious,” said protester Mona al-Farsi.