In a dramatic incident off the Greek port city of Piraeus, near Athens, the Greek Navy minehunter Kallisto was involved in a collision with a commercial freighter. The force of the impact left the warship cut in two, tearing off the vessel’s stern.

“On Tuesday, October 27, 2020 and around 07:30 in the sea area of the Saronic Gulf, a merchant ship collided with NTHI KALLISTO,” the Greek Navy, also known as the Hellenic Navy, said in a statement. "The Navy undertakes all the necessary actions to deal with the incident.” 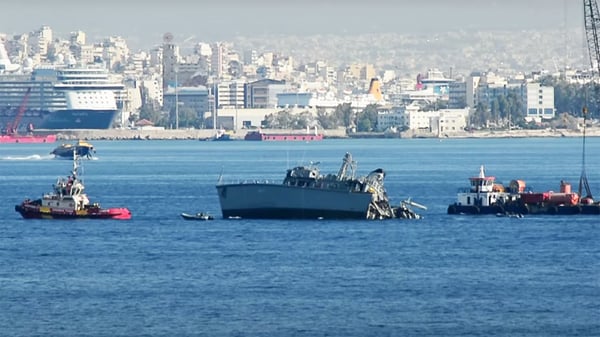 Two Greek Navy sailors were injured in the accident and taken to Athens Naval Hospital. The other members of the minehunter’s 27-person crew were reportedly safe and sound.

The commercial vessel involved was the Maersk Launceston, a Portuguese-flagged container ship. At the time of writing, there were no reports of injuries on that ship and it’s unclear what damage it might have suffered. In a tweet, Maersk said: “The vessel has activated its emergency response procedures and the crew has been participating in the rescue operation for the seafarers of the naval vessel.”

The 870-foot, 50,700-gross-tonnage Maersk Launceston had departed Piraeus and was said to be bound for the port of Çanakkale in Turkey. The ship’s present owner is the Essberger company, based in the German port of Hamburg, which describes itself as a “leading operator of chemical tankers within Europe.”

The exact cause of the accident remains unclear, but local media reports described the freighter “passing over” the mine Greek Navy minehunter as the latter was leaving port. The captain of the Maersk Launceston has reportedly been arrested.

Photos taken after the impact show the 197-foot Kallisto listing heavily to starboard in the water before being towed to the naval base on the nearby island of Salamis, minus its stern section, as seen in the accompanying video.

One of two Hunt class minehunters in service with the Hellenic Navy, the Kallisto was originally built by Vosper Thornycroft for the British Royal Navy as HMS Berkeley and was launched in 1985 before seeing service during mine-clearance operations in the 1991 Gulf War. Together with its sister ship HMS Bicester (now named Evropi), it was transferred to Greece between 2000 and 2001.

A total of 13 Hunt class vessels were built for the British Royal Navy. Six of these ships remain in Royal Navy service. Another two were transferred to the Lithuanian Navy.

These vessels were originally designed to perform both minesweeping and mine-hunting duties, meaning they could both find mines and neutralize them, with provisions for a team of divers, unmanned submersible mine-disposal systems, and a mine-hunting sonar system. In Royal Navy service, their minesweeping equipment was subsequently removed, turning them into pure minehunters.

When the first Hunt class ships were introduced in the 1980s, they were also the largest warships ever built with fiberglass hulls. Mine countermeasures ships are typically built with non-metallic hulls, in part to help reduce their vulnerability to magnetic mines. This also reduces their acoustic signature, which, in turn, makes them less likely to trigger acoustic mines.

Considering the damage inflicted on the Kallisto, it might be considered fortunate that injuries were limited to two crewmembers. The extent of the damage will likely put the Kallisto out of action for good, although certain items can be recovered and used as spares for the Evropi.

Should the Hellenic Navy opt for a direct replacement for the Kallisto, the U.K. government has another Hunt class vessel for sale. The former HMS Atherstone is currently laid up at Portsmouth in the United Kingdom and has been offered for sale since December 2017.

It’s worth noting that the Greek Navy isn’t the only one to have suffered this kind of mishap recently. A month earlier, a similar accident befell the Russian Navy’s Parchim class corvette Kazanets, which collided with a civilian cargo ship in the Baltic Sea. The damage to the Kazanets was less severe and the Russian warship was able to continue under its own power, although the impact was sufficient to breach the hull of the cargo ship above its waterline.

In 2017, the Russian Navy intelligence-gathering ship Liman also sunk in Turkey’s Bosphorus strait, after colliding with a freighter loaded with sheep.

This morning’s incident in the Aegean emphasises the dangers inherent in crowded shipping lanes. In this case, it seems the Kallisto’s structural integrity may have prevented a far worse accident. At the same time, with the hull ripped in two, it’s likely also due to the crew’s efforts to mitigate the damage that the Kallisto remained afloat long enough to be salvaged.