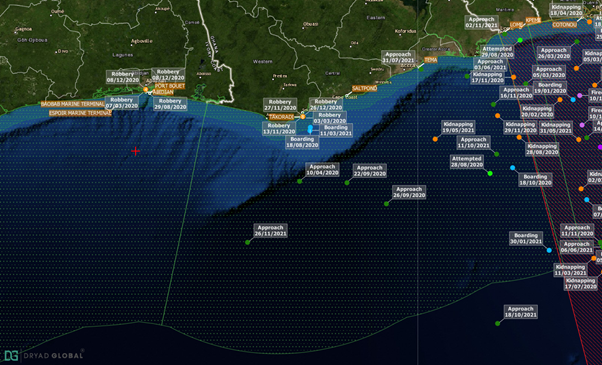 Attack confirmed. Pirates are understood to have boarded and hijacked the vessel before departing the vessel with stolen cargo. All crew reported safe.

Reporting indicates that the owners of the product vessel MT B OCEAN (IMO 9377834) have lost contact with the vessel on the evening of the 24th January 22. The vessel is understood to have been operating as a bunker vessel 54nm SSW of Abidjan when contact was lost. 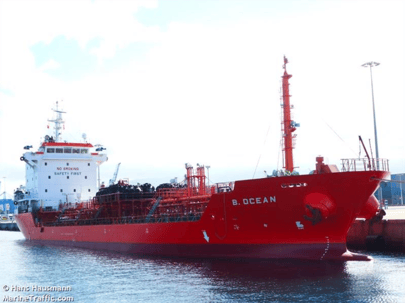 Early reporting suggests that the vessel may have been   attacked whilst operating offshore. At the time of   publishing, the vessel has not broadcast on AIS for 17hrs.

Details remain unclear and it is understood that coastal law   enforcement agencies have been tasked with tracking the   vessel. All maritime traffic are advised to exercise   increased vigilance and report any signings.

Whilst details remain unclear, information released by MDAT GoG on the evening of the 24th indicated that a report had been received from local fishermen along the western coast of Ghana indicating that a group of unidentified individuals had been sighted reportedly putting to sea a local fishing boat with a high-powered outboard motor in the early hours of 24 January 2022. According to the report, the individuals are not known locals and are suspected not to be Ghanaians. Whilst at this stage it is unclear whether there is any connection between these events, the reporting indicated a potential piratical intent throughout ECOWAS MMCC Zone F.

The maritime crime and piracy footprint throughout the area is historically low. The port of Abidjan is home to sporadic reporting of incidents of low level maritime crime, however there are thus far no reported incidents of Piracy within the offshore domain. Throughout 2021, incidents of piracy and maritime crime indicated a significant downturn on previous years throughout the wider West African region. Within the downturn of incidents, a further trend  indicated a broadening of the piracy footprint to areas well beyond Nigerian waters, an area which had historically served as the heartland for such activity. Despite the downturn in overall incident reporting, there was an increase in reported incidents occurring beyond the JWC-025 designated HRA.

Whilst specific details of the incident remain unknown, the hijacking of commercial vessels remains highly irregular with the last recorded hijack recorded as the hijack of the offshore fishing vessel LIANPENGYU 809 on the 07 February 2021, 83nm WSW Port Gentil, Gabon.

Mariners are advised to exercise caution when transiting this area and report any sightings:

MDAT-GoG has reported that a vessel has been approached whilst transiting from Lomé to Abidjan.

Reporting indicates that the MT SEAKING (IMO:9292187) was approached by a small boat launched from..

Reporting from MDAT-GoG indicates that a vessel was boarded 7nm SE Agbami Terminal.