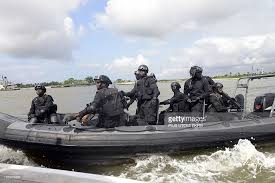 The Central Naval Command (CNC), which is spearheading the operation, said the 90-day operation in the waterways, which commenced from the Nigerian Port Authority (NPA) jetty, Warri, is aimed at conducting evolutions to make the area crime-free and boost economic activities.

Flag Officer Commanding (FOC) CNC, Rear Admiral Saidu Garba, during the launch of the programme, stressed that it was to consolidate on the impressive achievements recorded by the navy during the conduct of operation ‘Calm Waters’ which was activated in May 2019.

A statement by the command’s information officer, Commander Blessed Nuhu, quoted Garba as saying that the operation had, to a large extent, contributed to the reduction in reported incidents of sea robbery, piracy, illegal bunkering, smuggling, illegal refining and other maritime crimes within the Nigerian waters.

He stressed that within the period of the operation, the navy recorded a total of 27,918 hours of sea patrol which resulted in the arrest of 31 vessels and 357 persons suspected to be engaged in maritime illegalities.

The FOC added that naval bases cumulatively neutralised a total of 186 illegal refineries with 2,036 metal tanks and ovens as well as seizing a total of 23,102,900 litres of illegally sourced products.

Garba pointed out that notwithstanding the efforts made by the navy and other security agencies at tackling the numerous security challenges prevalent in Nigeria, palpable threats still persist particularly in Nigeria’s maritime domain.

According to him, there are still threats to attack critical maritime infrastructure, both onshore and offshore, hence the need for the command to launch the new operation.

“Operations of this nature are critical towards sustaining the resources and huge potential of our dear nation which sadly is undermined by domestic and sometimes cross-border threats.

“The situation calls for measures to bring sanity to the nation’s maritime domain. I, therefore urge all the participating ships and platforms of the CNC to be alert to their responsibilities and put in their best in other to maximise the opportunity and consolidate the gains achieved towards securing Nigeria’s maritime domain,” he noted.

The FOC explained that within the limits of available resources, the CNC had been focused and proactive in combating the myriads of threats and illegal activities in the country’s waterways.

He affirmed that the protection of resources and economic activities in the nation was a collective responsibility of all stakeholders in the region and called for the cooperation and support of all maritime security stakeholders as well as the civil populace in confronting threats to the nation’s common interest.

In his remarks, the Fleet Commander, Central Fleet and Officer in Charge of the Tactical Command of the Operation, Rear Admiral Emmanuel Beckley stated that the operation will involve the deployment of all the available ships, helicopters and other platforms under the command.

By Emmanuel Addeh in Abuja and Sylvester Idowu