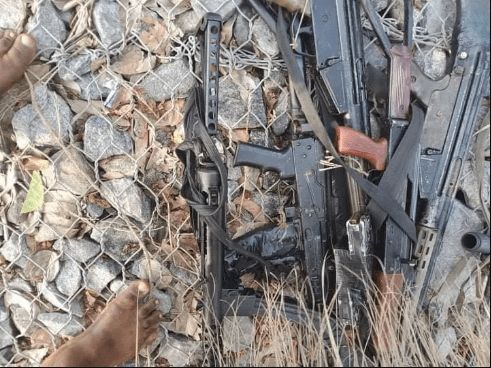 The command’s spokesman, Odiko MacDon who disclosed this in a statement made available to newsmen on Sunday evening in Uyo, said the suspected sea robbers met their waterloo on Thursday, March 4, 2021, during a gun duel.

MacDon said three other members of the gang escaped with bullet wounds while arms and ammunition including AK47 were recovered from them.

“On March 4, 2021, at about 2:30 pm, a team of 29 PMF personnel, who are on special duty at Ibeno, led by ASP Abubakar Yakubu, acting on credible intelligence, while on patrol at Iwukpom/Opolum water channel, accosted a gang of sea pirates numbering about seven which led to a gun battle.

“In the ensuing milieu, four of the sea pirates met their waterloo as they fell to the superior firepower of the operatives while three escaped with bullet wounds.

“Exhibits recovered from the pirates include four AK47, two Lar and a K2 rifles, four magazines, one fibre speed boat mounted with 200HP and 115HP engines; one dismounted engine, some gallons of petrol, eight white kaftans and items suspected to be charms,” the statement said.

The Chief of Naval Staff, Vice Admiral Ibok-Ete Ibas, has decried the involvement of Naval..