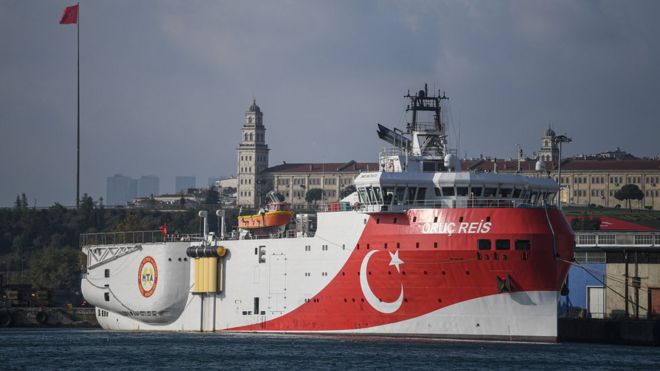 Greece has issued a naval alert after Turkey announced it was sending a ship to carry out a drilling survey in waters close to a Greek island off Turkey's south coast.

Turkey's initial advisory on Tuesday sparked alarm in Greece amid reports that naval ships from both countries were preparing to patrol the area.

The EU said Turkey's alert was "not helpful and sends the wrong message". Turkey said its survey ship was working entirely within its continental shelf.

Although the Turkish survey ship, Oruc Reis, was still reported to be at anchor in the Turkish port of Antalya on Wednesday, the Turkish alert - known as a Navtex - prompted alarm in the Greek military and was condemned by Athens as illegal.

The survey alert covers an area between Cyprus and Crete. Unconfirmed Greek reports said Turkish and Greek navy ships were heading to an area near the Greek island of Kastellorizo, a short distance from the Turkish mainland.

This Turkish drilling ship, Fatih, went into operation off Cyprus last year
Relations between Greece and Turkey have been icy anyway. The two countries have quarrelled over migrants crossing into Greece; then earlier this month Greece was appalled when Turkey said the Hagia Sophia museum in Istanbul, for centuries an Orthodox Christian cathedral, would be turned into a mosque.

Greece has said the Turkish naval move violates its sovereign rights. Prime Minister Kyriakos Mitsotakis spoke to German Chancellor Angela Merkel and said he would talk to other Greek political leaders about the escalation on Thursday.

Nato allies Turkey and Greece are on separate sides in a race to develop energy resources in the Eastern Mediterranean.

In recent years, huge gas reserves have been found in the waters off Cyprus, prompting the Cypriot government, Greece, Israel and Egypt to work together to make the most of the resources. As part of that agreement, energy supplies would go to Europe via a 2,000km (1,200-mile) pipeline in the Med.

Last year Turkey stepped up drilling to the west of Cyprus, which has been divided since 1974, with Turkish-controlled northern Cyprus only recognised as a republic by Ankara. The division of the island was marked in Turkey this week, and Ankara has always argued that the island's natural resources should be shared.

Then, in November 2019, Ankara signed a deal with Libya that Turkey said created an exclusive economic zone (EEZ) from the Turkish southern coast to Libya's north-east coast. Egypt said it was illegal, Greece said it was absurd as it failed to take account of the Greek island of Crete, midway between the two countries.

At the end of May, Turkey said it planned to start drilling in the coming months in several other areas further west, alarming EU members Greece and Cyprus.

"Everyone should accept that Turkey and the Turkish Republic of Northern Cyprus cannot be excluded from the energy equation in the region," said Turkish Vice-President Fuat Oktay.

Many Greek islands in the Aegean and the Eastern Mediterranean are within sight of the Turkish coast, so issues of territorial waters are complex and the two countries have come to the brink of war in the past.

If Greece were to extend its territorial waters from six miles to the maximum of 12 allowed internationally, Turkey argues its sea routes would be severely affected.

Apart from territorial waters, there are exclusive economic zones (EEZs), like that agreed between Turkey and Libya, but also like the Cypriot EEZ accords with Lebanon, Egypt and Israel. They can extend for 200 nautical miles.

Greece argues that the Turkish alert involves a large area of the continental shelf of Kastellorizo. But Turkish Foreign Minister Mevlut Cavusoglu said last month that "islands that are far from the mainland and closer to Turkey cannot have a continental shelf".

Turkey's vice-president said last month that Ankara was tearing up maps "drawn to imprison us on the mainland", and Ankara insists it is acting with the UN's Law of the Sea.

Greece's European allies have backed its position. German Foreign Minister Heiko Maas, on a visit to Athens, urged Ankara to stop "provocations in the Eastern Mediterranean". French President Emmanuel Macron, who was in the region on Thursday, gave Cyprus and Greece his full backing.

Condemning Turkey's "violations of their sovereignty", Mr Macron said anyone threatening an EU member's maritime space "must be sanctioned". French relations with Turkey have been strained in recent months, particularly over Libya.

On Wednesday, an EU spokeswoman said Turkey's new move was "not helpful and sends the wrong message".

The bloc had repeatedly underlined that the limitation of exclusive economic zones and the continental shelf should be addressed through negotiations and in good faith, she added. Source: BBC News

Earlier this month, UN Secretary-General Antonio Guterres registered the Turkey-Libya deal on the..

The spokesman for Khalifa Haftar's forces Ahmed Al-Mismari said they are at war with Turkey after..

Turkey and Greece spark new flare-up in the Med

ANKARA: Fears of a new conflict between Turkey and Greece have soared after Ankara sent a new..