Reporting indicates that a container vessel has suffered an explosion whilst docked within JEBEL ALI port. 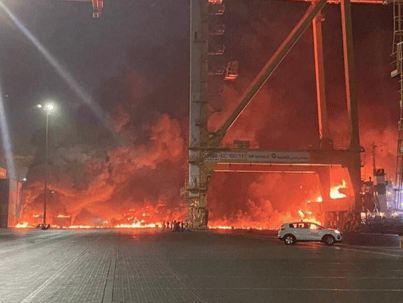 Early indications from footage taken at the incident, indicate that the vessel MV OCEAN TRADER IMO9056739 may have sustained an explosion within a forward container. Image analysis by @auroraintel indicates further that the vessel may be the vessel involved.

Details regarding the precise nature of the explosion remain unclear. At this stage there is no evidence to indicate a compromise of security either within port or upon a vessel. Following the incident, a number of online narratives appeared online seeking to draw a connection with the wider Israel / Iran narrative that the New York Times has labelled a 'Shadow War'. At this stage it is assessed that there is no link between this and the incident at Jebel Ali Port.

The deployment of a device with such a significant explosive content by either state would represent a major departure from established targeting methodology, which thus far appears to have been limited to the deployment of tactical charges within areas of vessels designed to limit damage and risk to life. Further still, the targeting of a vessel within port, which would exponentially increase the risk of civilian casualties, is not an action commensurate with Israeli action to date which has mostly involved retaliatory strikes against vessels within international waters. Furthermore, it would represent a significant, and blatant, violation of international law by either state and would likely work contrary to any intended aim of such an action.

Thus far, maritime insecurity within the wider Middle East remains characterised by acts of conflict overspill and limited strike action between Israel and Iran. Such incidents to date have been highly targeted and in doing so has allowed both states to control the rate of escalation and maintain this within a tolerance, according to their intended aim. Within the context of the later, there remains a residual risk to wider commercial shipping through the ever-present threat of misidentification and miscalculation, and as such vessels should ensure a high degree of vigilance and continue to liaise with US and EU coalition forces throughout the region. Despite this, the risk to commercial shipping remains moderate, indicating incidents are a realistic possibility but unlikely.