Is the Israel Iran conflict being played out using commercial vessels?

Reports on the morning of 24th April 2021 from the Syrian Arab News Agency (SANA) indicated that an explosion had occurred on a tanker causing the death of at least 3 crew. The report was largely framed as a suspected ‘drone attack’, with a number of media outlets suggesting this incident was a further evolution in the recent Israeli and Iranian ‘tit-for-tat’ attacks on each other’s commercial vessels.

Despite this initial speculation, there is no evidence to indicate the involvement of a drone or Israeli involvement. Furthermore, there is limited rationale that would indicate this incident would have been a viable course of action by Israel.

The vessel was initially identified by TankerTrackers.com as the MT WISDOM (IMO9182069) and is reported to have been carrying approximately 300,000 – 350,000bl of crude oil at the time. TankerTrackers further identified the vessel as having recently conducted StS transfer of Iranian crude with the Iranian flagged vessel ARMAN 114 (previously ADRIAN DARYA 1).

Following the initial report by the SANA, reports began to surface from the Iranian ‘Nour News’ agency indicating that a tragic accident had occurred onboard the vessel because of a welding incident. Images of the vessel supplied to the open-source intelligence community by @AutoraIntel appear to confirm the presence of an explosion. 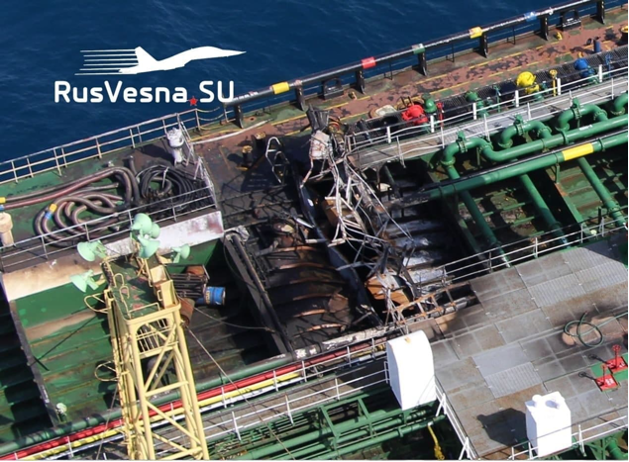 Whilst the specific cause of this incident is yet to be confirmed, it remains vital to consider the impact and potential consequences of Israeli involvement. Iran and Israel have seemingly been involved in an ongoing ‘tit-for-tat’ exchange of strikes against merchant vessels associated with each country. Strategic intent for both is focused upon historical grievances and Israel’s substantial opposition to Iran and America returning to the terms of the JCPoA. The actions taken by both states in respect of attacks on merchant vessels have to date been highly targeted.

Attacks against vessels have occurred against vessels directly owned or flagged with each state and have occurred in a manner that was unlikely to substantially compromise the safety and integrity of the vessels. Far from coincidental, such attacks are assessed to be planned in such a manner as to present as forceful diplomatic signalling yet limiting the potential for escalation. A key component within this methodology is a likely desire to restrict attacks to vessels and infrastructure rather than personnel. The death of personnel as a result of the actions of either state would be seen as a significant escalation of force and would likely result in corresponding escalation of action.

It remains highly unlikely that Israel would seek to take a course of action at this time that would result in the death of civilian personnel, as reported in the incident onboard the MT WISDOM, which would likely significantly escalate tensions with Iran. Further still, it is highly unlikely that Israel would seek to target a fully laden vessel within the Eastern Mediterranean and subsequently risk an ecological disaster of considerable proportions.

If however, Iran and Israel continue in their measure for measure actions against each other’s commercial vessels then risk for incidents being misconstrued remain high, as does the potential for conflict escalation as a result of misattribution or miscalculation. Within such an environment the importance of accurate reporting and evidence-based analysis remains paramount.

Update as at 2000hrs 25 January 2022: Attack confirmed. Pirates are understood to have boarded and..