Kidnapping In Nigeria - The Ransom Business

Whilst the turbulent years of piracy within the Indian Ocean brought about global a collective understanding of the plight of seafarers within this region, resulting in large scale international naval cooperation and even a Hollywood film. Over the last six years a new regional threat of kidnapping has emerged within the Gulf of Guinea. With a 68% increase in recorded kidnappings of crews from vessels within the Gulf of Guinea since 2016, and a total of 177 personnel kidnapped in 2019, the problem is one of global significance. More seafarers suffer here than in any other part of the world however efforts to combat the pirates and criminals have been subject to the complexities of the region.

The confluence of oil wealth and weak governance has led to the conditions that now see West Africa as the global epicenter of violent maritime crime. While piracy in West Africa has fallen in line with a wider global downturn, the narrative that surrounds maritime security in West Africa is complex and often leads to difficulties when assessing current events and making forward projections.

"..security in West Africa is complex and often leads to difficulty when assessing current events ...."

Piracy in West Africa remains cantered on Nigeria and indeed any progress that is to be made towards a resolution in the region must originate here. Despite the anti-graft legislation and pro-business efforts of President Bouhari, endemic corruption and widespread unemployment continue to blight Nigeria. Weak law enforcement and convoluted bureaucracy has led to a lack of formal structures and resources to deal with the soaring crime rate. Traditionally Nigeria has taken a ‘land first’ approach to securing trade networks, albeit with limited resources, and despite 90% of Nigerian imports and exports moving by sea. The Niger Delta is the focal point of West African maritime crime. The presence of global oil in the region has served to exacerbate social tensions between communities and private companies, which in many cases has given rise to militancy, illicit bunkering and fuel theft. The increased policing of the Nigerian EEZ may have created a climate where piratical groups within the region calculate that kidnapping is a preferable option in terms of activities to conduct within the area, as opposed to robbery. This realistically could explain the recent rise in kidnappings within the last 18 months, and is likely driven by a rational cost/benefit analysis of the risks piratical groups face. Piratical groups may have inferred that a high risk/high reward activity such as kidnapping is a more prudent use of assets in a policed area, as opposed to a robbery which may pose the same level of risk but without the same level of reward. 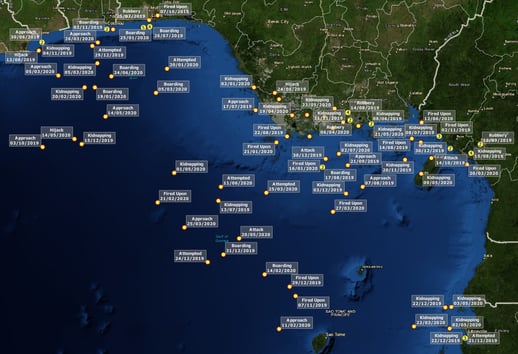 ..Niger Delta is the focal point of maritime crime....

Beyond Nigerian waters, West African piracy has seen a number of notable incidents and trends. At the time of publishing, 13 attacks occurred within the waters of Togo and Benin and 11 within the waters off Cameroon. The latter represents an 83% increase on incidents from 2018 and has led to Cameroonian waters being designated as the fourth most affected by maritime crime after Nigeria, Indonesia and Malaysia. Preventative anti-piracy measures taken by the governments of these countries include Benin, which announced in November that it was mandatory to embark state guards when calling at Cotonou Port. Additionally, the government of Cameroon announced in September 2019 that they would provide, free of charge, embarked naval personnel as security on all vessels calling at Douala Port. Governments from beyond the region have also announced measures, which indicates heightened international concern about the maritime security environment throughout West African waters. Following the kidnapping of 45 Indian personnel in three separate incidents in 2018, India announced in June 2019 that it would ban all Indian nationals from serving as mariners within the region.

The fall in maritime security incidents in the region can be partly attributed to several regional coordinated responses and legislative frameworks that have been implemented in West Africa. At present, the Djibouti Code of Conduct (DCoC), the African Union’s Lomé Charter, and the Yaoundé Code of Conduct, function as the basic structures for anti-piracy efforts across Africa. Additionally, in 2019, Nigeria took tangible steps towards more formalised mechanisms of support and coordination. These include the Suppression of Piracy and other Maritime Offences Bill’ and the Nigerian ‘Deep Blue’ project however both of which are yet to ascend into codified legislation. The ‘Suppression of Piracy and other Maritime Offences Bill’, signed on 24 June 19, sees Nigeria become the first state in West Africa to introduce a standalone law to specifically fight piracy. The bill also fulfils the international requirement for specific legislation against piracy set by the IMO. From a legal perspective, the bill introduces legal terminology and measures for the prosecution of maritime crimes. The bill also grants increased powers to seize vessels or other vehicles used to conduct maritime crimes. The Nigerian Navy has also announced that they intend to use specifically established ‘maritime courts’, in the hope this will expedite the prosecution of maritime crimes.

Another significant and tangible step towards increased security throughout Nigerian waters is the advancement of the Nigerian Maritime Administration Support Agencies (NIMASA) ‘Deep Blue’ project, which aims to implement integrated surveillance and security architecture to address maritime crime. In August 2019, NIMASA established its first command and control centre in Lagos. The centre will serve as the base for situational intelligence for the Deep Blue Project. As well as these additional organisational frameworks, Nigeria has increased the hardware at its disposal to combat maritime crime. This included the purchase of helicopters, Damen FCS 3307 Patrol vessels and speedboats from the Israeli security firm, HLSI Security Systems and Technologies Ltd. HLSI are also contracted to provide training and mentoring to the Nigerian Navy and Maritime Police, as part of the agreement.
NIMASA continues to partner with the nigerian private maritime security firm Ocean Marine Solutions (OMS), which provides resources to the Nigerian Navy in the form of vessels and offshore craft, whilst also administering the Lagos Secure Anchorage Area (SAA). Although future security arrangements in Lagos SAA are uncertain, due to a legal challenge following a decision by the Nigeria Port Authority (NPA) to withdraw consent for OMS to provide commercial services to vessels bound for Lagos.

The 2019 Global Maritime Security Conference in Abuja in September 2019, heralded several key commitments from regional states and international partners to prioritise maritime security throughout the region. Pledges towards enhanced cooperation between naval forces and coastguards and capacity building initiatives from international partners were forthcoming. Yet the prospect of a collectivised regional response to maritime security across West Africa in the near future appears unlikely. Indeed, while Nigeria has shown signs of effectiveness in dealing with its MARSEC problems, as evidenced by the downturn in incidents, the same progress has yet to be mirrored in neighbouring states. In the short-to-medium term, Nigeria is expected to continue to be the epicentre of West African piracy, however the downward trajectory of incidents is expected to continue. This is likely to have a squeezing effect on neighbouring states, forcing piracy into increasingly permissible areas, and without reciprocal investment and commitment to resolving MARSEC issues, a steady increase in incidents is anticipated.