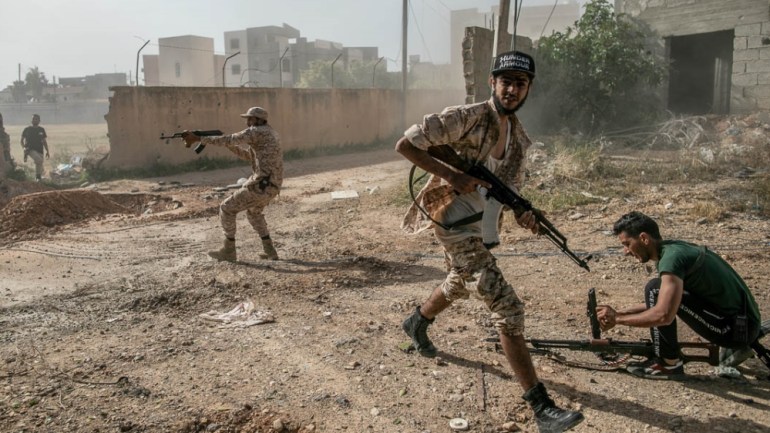 The renegade military commander is holding rallies and polishing his image ahead of polls, according to Libya observers.

Libya’s renegade military commander Khalifa Haftar is polishing his political image ahead of elections after a crippling rout on the battlefield and with his support waning at home and abroad, analysts say.

Haftar’s eastern-based forces battled for more than a year to seize the capital Tripoli in the west, but their defeat last June set the stage for the United Nations-backed peace talks, a unity government, and a nationwide election planned for December.

“He is hoping the elections will secure him a political victory after his military defeat,” said international relations professor Miloud el-Hajj.

Haftar has emerged as a key player during the decade of violence that followed the 2011 overthrow of dictator Muammar Gaddafi.

He has battled armed groups and built a solid base of support among eastern Libya’s influential tribes – as well as neighbouring Egypt, the United Arab Emirates, and Russia.

But two years since his Libyan National Army launched its offensive to overthrow a Turkey-backed unity government in Tripoli, the landscape is extremely different.

A formal truce last October set in motion a UN-led process that led to the creation of an interim government tasked with unifying the country’s divided institutions, launching reconstruction efforts, and preparing for the December vote.

Haftar kept a low profile throughout the talks, but in recent weeks he has made a comeback with public rallies and pledges to build three new towns and thousands of housing units for the families of “martyrs”.

“His tone and language have changed … He has dropped his military discourse” in favour of pledges to improve living conditions, said el-Hajj.

Haftar built his power base around Libya’s second city of Benghazi, the eastern cradle of the 2011 NATO-backed uprising that toppled and killed Gaddafi.

He found allies among the region’s powerful tribes that provided much of the troops for Haftar’s various military offensives.

But today, Haftar has “lost his base of support”, according to Libyan analyst Mahmoud Khalfallah.

“He no longer enjoys the indisputable support of the tribes, who blame him for having involved their sons in a war in which many died for nothing,” Khalfallah said.

“He knows they no longer trust him and that they would not give up their sons again for another war.”

Despite several meetings with tribal leaders in a bid to regain their support, Haftar is now faced with “serious problems of defiance”, according to Libya specialist Jalel Harchaoui.

“His finances have dried up and his hopes for territorial expansion in the west have been blocked,” Harchaoui added.

Even Haftar’s foreign allies have grown wary and thrown their weight behind the new interim government, Khalfallah said.

“His foreign sponsors … have understood that the political process is the only possible solution” to safeguard their interests in Libya, he said.

Haftar has played a controversial but key role in Libya since it descended into chaos after Gaddafi’s overthrow.

Before the campaign to seize Tripoli, he launched a successful operation in May 2018 to remove rebels from the eastern city of Derna, followed by another in 2019 in the oil-rich desert south.

The commander, who served in Gaddafi’s armed forces before falling from grace following Libya’s stinging defeat in Chad in 1987, is now aiming to make a political comeback, said el-Hajj.

One European diplomatic source warned if key players such as Haftar are excluded from the political process, they could become “spoilers” and undermine efforts to stabilise the country.

Verisk Maplecroft analyst Hamish Kinnear said Haftar may run in a presidential election or back a candidate.

If presidential and legislative polls are postponed beyond December, however, Haftar “will likely use this to charge the transitional government is illegitimate and consider a return to armed conflict”, Kinnear said.

But, he added, Haftar is “no longer as powerful as he once was”.

Dryad and cyber partners RedSkyAlliance continue to monitor attempted attacks within the maritime..

Dryad and cyber partners RedSkyAlliance continue to monitor attempted attacks within the maritime..