You don’t need a peg leg, eye patch, or parrot on your shoulder to be a modern-day pirate, but guns and high-speed boats are useful. Last year pirates hijacked three vessels, fired on 11, and boarded 161, according to a report this month by the International Maritime Bureau’s Piracy Reporting Center. 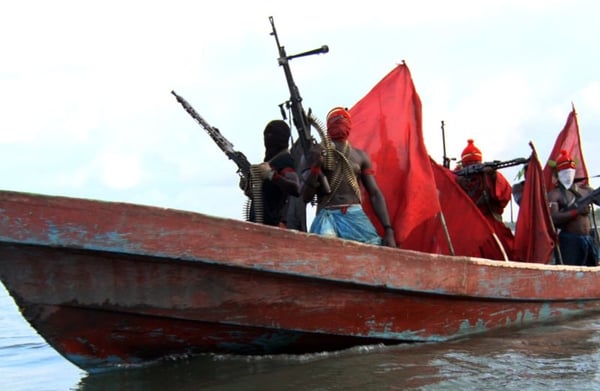 Maersk, the world’s biggest shipping company, is fed up. “It is unacceptable, in this day and age, that seafarers cannot perform their jobs of ensuring a vital supply chain for this region without having to worry about the risk of piracy,” said Aslak Ross, head of marine standards at Copenhagen-based A.P. Moller-Maersk A/S, told Bloomberg News. “The risk has reached a level where effective military capacity needs to be deployed.”

Crime on the high seas is hard to combat because distances are vast and the pirates can make their getaways before help arrives. The waters off Somalia used to be infested with pirates, but the European Union, NATO, and a U.S.-led task force managed to protect the shipping lanes. So the action has moved to the lightly patrolled waters off Nigeria—the vast Gulf of Guinea, stretching from Gabon to Liberia—according to the Bloomberg story by William Clowes in Abuja, Nigeria.

“Globally,” the Piracy Research Center report says, “135 crew were kidnapped from their vessels in 2020, with the Gulf of Guinea accounting for over 95% of crew numbers kidnapped. A record 130 crew members were kidnapped in 22 separate incidents.” The International Maritime Bureau advises ship captains to stay 250 nautical miles off the coast, beyond pirates’ reach, until ready to “commence cargo operations at a berth or safe anchorage.”

While the Gulf of Guinea is the most dangerous spot, the Piracy Research Center says pirates are also operating in the Singapore Straits and in the ports of Indonesia. On the bright side, there were no reports of piracy off Somalia in 2020.

Poverty and unemployment are breeding grounds for the Gulf of Guinea pirates and need to be be addressed, but shippers such as Maersk can’t wait for those underlying conditions to be fixed. Attacks are pushing up the cost of insurance while endangering the lives of crew members. Shippers want an international naval coalition to crack down on the pirates, but such support appears unlikely because the value of shipping isn’t as great as it is off the Horn of Africa, the approach to the Suez Canal.

“The perpetrators of such incidents are perfectly aware there is almost no risk of being caught,”  Munro Anderson, a partner at London-based maritime security firm Dryad Global, told Bloomberg. For now, piracy pays.

The narrow waters separating the Arabian peninsula from the Horn of Africa have never served as..