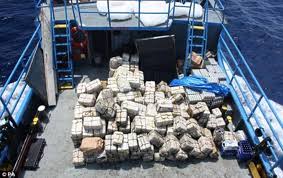 The story of how illegal drugs make their way across the ocean often starts with a failing or banned fishing fleet in a marginalized coastal community. The reasons vary, but depleted seafood stocks from overfishing in areas of Asia, polluted waters in the Gulf of Guinea in West Africa, and the declaration of a new marine protected area in the Caribbean have all stopped fishers from earning their livelihood and sparked some vessels to turn to shipping illicit substances, according to an international team of researchers who recently analyzed drug busts.

According to a September study in Fish and Fisheries, the use of small fishing vessels to smuggle illegal drugs is on the rise across the world as traffickers seek to take advantage of porous borders and the relatively murky laws governing international waters. The use of small vessels has tripled in the past eight years to represent about 15 percent of the total global retail value of illegal drugs. “The fishing sector is increasingly a vector for transporting drugs,” says Dyhia Belhabib, principal investigator with Ecotrust Canada, a nonprofit organization working to build a conservation-based economy and the lead author of the study.

Belhabib first became interested in conducting a study during a trip to Guinea-Bissau, where she heard that small boats were being used to smuggle drugs as part of the country’s major trafficking problem. She later began working on the study as part of a larger project called Spyglass. The publicly available database collects criminal records of sea vessels from law enforcement officials, media and other sources as an effort to increase the visibility of repeat offenders and improve international policing. The platform, hosted by Ecotrust Canada, is intended to help officials, nongovernmental organizations and others track and sanction high-risk vessels.

Ife Okafor-Yarwood, a lecturer in sustainable development at the University of St. Andrews in the U.K. who wasn’t involved in Belhabib’s study, says Spyglass is a helpful tool that is easy to navigate for researchers and the general public. “Spyglass can be a useful tool for maritime law enforcements,” she says, “especially in countries where the monitoring control and surveillance capability is weak as they can use it to track a vessels history of violations and other fisheries related crime.”

International waters are notoriously lawless, and vessels of all sizes are often suspected of involvement in crimes such as illegal fishing, human trafficking, onboard slavery and murder. The United Nations Office of Drugs and Crime noted in a report that drug trafficking was linked to illegal fishing, but Belhabib wanted to verify this by looking at the record.

For the study, Belhabib and her colleagues analyzed 292 cases from media reports, press releases and reports from governments and other sources on trends and patterns, looking for evidence of drug busts in six languages: English, Spanish, Portuguese, Arabic, French and Chinese. They first took the number of apprehended vessels and determined the value of the drugs onboard. They then ran models to estimate how many vessels—detected and undetected—were involved in illicit trade over time, and what portion of the overall drug trade their cargoes represented using figures from the United Nations Office of Drugs and Crime.

In a report by Global Financial Integrity, a Washington, D.C.-based think tank that produces analysis of illicit finances, the researchers calculated that illicit drug revenue smuggled by fishing vessels around the world amounted to $80 billion a year, or about 15 percent of the $426 billion to $652 billion yearly revenue brought in by drugs worldwide.

Belhabib estimates that an individual vessel can bring in up to $70 million worth of drugs in a single shipment. But her team also found that the average size of an individual shipment is getting smaller over time, even as the overall amount of drugs shipped by these vessels is increasing. What this means in practice is that traffickers are splitting larger shipments so if one boat is caught by authorities, the traffickers don’t lose as much.. This small-boat strategy is particularly adaptable for cartels, she says. “They have multiple strategies to avoid getting caught and multiple strategies to lower the risk of losing a lot if they do get caught,” Belhabib says.

As opposed to what was previously surmised about drug smuggling’s connection to illegal fishing, Belhabib’s research didn’t show much of a link. She believes that traffickers might see vessels with clean records as less likely to get searched by law enforcement than high-risk, repeat offenders. Or that fishing enforcement officers may be missing the elephant in the room, as many fisheries law agents are trained to look for illegal catch rather than hidden drugs. “To be honest I think it’s a mixture of both,” she says.

Aldo Chircop, Canada Research Chair in maritime law and policy at Dalhousie University in Nova Scotia who was not involved in Belhabib’s study, says that the international community has trouble enough policing large vessels in international waters. But the monitoring and policing of small fishing boats is nearly impossible, even in a relatively rich country like Canada. He says that larger vessels fishing in North Atlantic waters often carry official observers, but small boats carry aren’t subject to that much oversight. While small boats may be occasionally subject to fisheries inspections, these officers aren’t trained to look for drugs. “I can understand how this might slip under the radar,” Chircop says. “Even providing basic search and rescue support for these vessels is a real challenge.”

The use of recreational yachts adds to the porousness of maritime borders, especially since private yachts and small fishing boats often come into all types of small ports lacking the type of monitoring occurring at the bigger harbors. “[Small fishing boats] are the vast majority of fishing vessels out there,” Chircop said. “They could easily be taking a load out from beyond the [national] territory at sea.”

Okafor-Yarwood says that the work highlights some of the same things she’s noticed in her research. But she has observed overlap in west African waters between drug trafficking and fishing crimes. “In the Gulf of Guinea, I’ve seen cases where trawlers are used to transport drugs, but they also engage in illegal fishing,” she says. “Absolutely, 100 percent there is overlap.”

She says that fishing vessels involved in trafficking are increasingly being paid in drugs rather than in cash, and they often sell the drugs back to the local coastal communities where they live to turn a profit. “Coastal residents become hopeless prey in the hands of the drug dealers,” she says.

In some regions, drug trafficking can still usher in illegal fishing indirectly, Belhabib says. They also analyzed the data they collected from media and other sources to look for region-specific patterns and trends around the world. The study showed traffickers using fishing vessels to transport drugs in global hotspots such as the Gulf of Mexico and the Caribbean for cocaine; East Africa for heroin; the sea between Morocco and Spain for marijuana; and the South China Sea for methamphetamines. In the latter case, she says that vessels might occupy themselves with illegal fishing on their return journeys from smuggling operations. In some Mexican marine protected areas, drug trafficking activity is so prevalent that park officials scared of cartel violence won’t even go into the waters, allowing fishing vessels to break the law and fish there with relative impunity. “It threatens conservation efforts,” Belhabib said.

Belhabib notes that the small-time fishers who transport large quantities of drugs likely aren’t seeing much of the profits. Most small fishing boats that turn to drug trafficking do so because fishers have a lack of other options when local fish stocks dry up, she says. The creation of marine protected areas can also be a problem if it’s done in such a way as to leave local fishers out of jobs.

Okafor-Yarwood says that in the Gulf of Guinea, polluted waters are also ruining the fish stocks, which leaves fishers more susceptible to working with drug traffickers. For her, enhancing the livelihood of coastal communities is an important way to buffer against more trafficking.

But better laws, and better enforcement of existing laws, is also key. Many of the countries prone to trafficking are often poor and lack the resources to police their waters. Rashid Sumaila, a professor in oceans and fisheries at the University of British Columbia in Canada who was not involved in Belhabib’s study, says that in the Gulf of Guinea each of the 16 countries that shares the bay manages their own waters. But if the countries banded together to police the waters, they might be able to afford a more effective coast guard.

Sumaila links the lack of policing to the larger problem. He thinks Belhabib’s study is a great addition to the literature on illegal activities at sea. Illegal fishing may not be happening on the same vessels trafficking drugs. But illegal fishing by vessels bearing foreign flags can deplete the stocks of poorer countries less capable of policing their own waters, which indirectly makes those local fishing communities more vulnerable to traffickers and the money they offer. Sumaila and Belhabib both point to the famous case of pirates in Somalia, noting pirates there were former fishermen until foreign fishing vessels illegally depleted local stocks.

“It’s not saying that fishermen are inherent criminals,” says Belhabib, “but some small fishermen have no choices.”

Reporting indicates that a number of armed criminals have committed a robbery at an equipment yard..

The team behind the World Superyacht Award-winning support vessel Hodor has unveiled a new COVID-19..

A lack of options for commercial fishermen in coastal communities has led to a boom in trafficking.