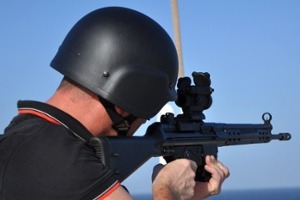 A report presented to the General Assembly by the Working Group on the use of mercenaries explores how the maritime security sector has evolved as a direct response to the challenge of piracy and other threats, including interstate warfare or militarised disputes, and terrorism in multiple geographical regions.

As maritime security has become a focus of concern among States and other international actors, there is a trend towards the hybridisation of security provision at sea, where public and private security combine.

“While these shifts carry the potential for more secure maritime transit, it may also come at a cost to human rights, including the disproportionate use of force, violations to rights to life, liberty, and due process guarantees,” the experts said.

Chair of the Working Group, Sorcha MacLeod, said non-existent or weak regulatory frameworks create a situation where the lack of monitoring and oversight enable human rights abuses to flourish. “Similarly, labour rights of private security personnel themselves are also at substantial risk. The proliferation and weak regulation and management of weapons at sea, particularly via floating armouries, are also problematic,” MacLeod said while presenting the report.

Download the OCIMF guidance on the use of armed guards:

The Working Group highlighted a reported increase in the use of maritime vessels to transport weapons for mercenary purposes, and the potential risks of human trafficking via the maritime transfer of coerced mercenary recruits from certain countries. “We are concerned by the opacity around the use of maritime vessels to support mercenary-related activities; further data collection and research are required in this area.”

The experts are concerned by lack of accountability for such violations. “Proper oversight and regulation of private military and security companies operating in the maritime context is urgently needed, in particular to ensure that victims of abuses at sea perpetrated by such actors can gain access to justice and effective remedy,” the Working Group concluded.

The guidelines for the Employment of Private Maritime Security Companies is intended to help..

Africa at the Mercy of Private Security Companies

With slim pickings in the Middle East after a Western withdrawal from Iraq and Afghanistan, Africa..

Through two separate operations, Tantita Security Services which is the private security contractor..