The growing Islamist insurgency in north Mozambique can only be halted with a coordinated military and development effort involving African and western countries or it risks spiralling further out of control, experts have warned. 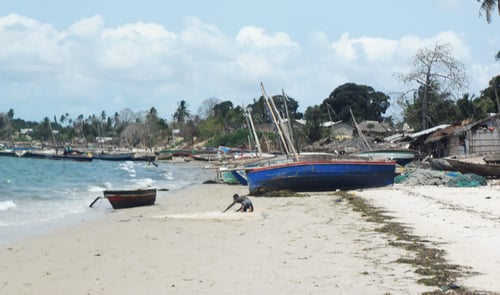 They argue that the raid on the port town of Palma last month by the Islamic State-affiliated local al-Shabaab group, which killed dozens and displaced thousands, marks a watershed moment in the escalating four-year conflict.

“This is the first time that foreign nationals have been targeted,” Bulama Bukarti, a sub-Saharan terror analyst with the Tony Blair Institute for Global Change, said of the attack on the Hotel Amarula used by contractors working on vast multinational gas projects nearby.

Bukarti also highlighted the relative sophistication of the assault, with tactics to target banks and warehouses – for money and food – derived from other Islamist groups in Africa.

“This is outpacing other insurgencies in Africa; it took Boko Haram in Nigeria six years to get to where this group has got to in three,” Bukarti added. “The situation is getting more and more desperate, and it needs something like a regional intervention from African nations with western logistical support.”

The attack on Palma was launched on 24 March by an estimated 100 or so fighters, who seized control of the town, which has a population of roughly 75,000. Reports circulated that beheaded bodies were seen in the streets, while a convoy of foreigners trying to escape was repeatedly ambushed. A Briton was among the dead. Eleven days later, the true death toll remains unknown, with internet and mobile phone networks disrupted.

The al-Shabaab insurgents emerged in Cabo Delgado province in 2017, a historically neglected Muslim area in a Christian-majority country. Last year, an estimated 1,600 were killed in the region, three times the number in 2019, and in the worst incident 50 villagers were beheaded in a football field.

A thousand miles away from the capital, Maputo, the region’s importance soared with the discovery of natural gas in 2010. But while companies such as France’s Total – which shut its operations in the area on Friday – and ExxonMobil of the US have begun to try to exploit the resources, few benefits have been shared.

Although the al-Shabaab group is affiliated to Isis, which claimed credit for the deaths of 55 people, including those from “crusader nations”, the links are loose. Experts believe the group shares tactics via Telegram and WhatsApp with al-Shabaab in Somalia and groups in west Africa, but its weapons and resources are obtained from raids and the fighters are local.

Western military analysts are nevertheless concluding that the threat posed is becoming strategic. Last month, just before the Palma attack, senior British soldiers were privately warning about the crisis in Mozambique, which along with conflicts in Yemen and Somalia is creating instability on the Indian Ocean’s west coast.

A recent reorganisation of the UK armed forces highlighted the creation of Rangers, a second-tier special forces battalion designed to carry out training and combat operations to tackle an insurgency and modelled on the US Green Berets. The idea is to offer an alternative to countries such as Mozambique, which had unsuccessfully turned to Russian and other mercenaries to contain the al-Shabaab threat.

In August 2019, President Filipe Nyusi signed economic and security agreements with the Russian president, Vladimir Putin, at a summit in Moscow. A month later 200 soldiers arrived from Russia’s Wagner Group in the north of the country, but it rapidly emerged they were out of their depth, alarming western investors in the gas fields.

They were replaced by South Africa’s Dyck Advisory Group, an anti-poaching specialist operating a handful of small attack helicopters. Dyck said it had rescued “a couple of hundred” as the insurgents struck Palma, but it had been criticised by Amnesty International for engaging in indiscriminate shootings against civilians as well as military targets during previous al-Shabaab raids.

Until now, the government in Maputo, historically non-aligned, has been reluctant to engage western help – and even played down the impact of the conflict. Nyusi said on Wednesday the government would respond with “forcefulness”, but also described the assault on Palma as not the biggest the country had seen.

However, last month about a dozen US Green Berets arrived in Mozambique to help train the country’s military in the fight against the Isis affiliate. After the Palma raid, Portugal, the former colonial power, said it would send 60 soldiers on a similar mission. Diplomatic sources said the UK was considering making a similar offer.

The situation in Mozambique is complex. Amnesty also accuses Mozambique security forces of engaging in violent reprisals, including summary executions, when they have restored control after previous raids, making any future security partnerships potentially fraught.

Alex Vines, who heads the Africa programme at Chatham House, said “it looks like the Mozambique government has accepted it can’t handle the crisis through private security contractors, although it doesn’t yet accept the need for a fully fledged intervention”.

But the concern is that any emerging western support may struggle to keep pace with the worsening security situation.

“At the moment, the direction that things are going is really badly,” said Brian Castner, a crisis specialist with Amnesty. “The rainy season which has prevented attacks has just ended and now we are into what is called the fighting season, which lasts until the fall.”