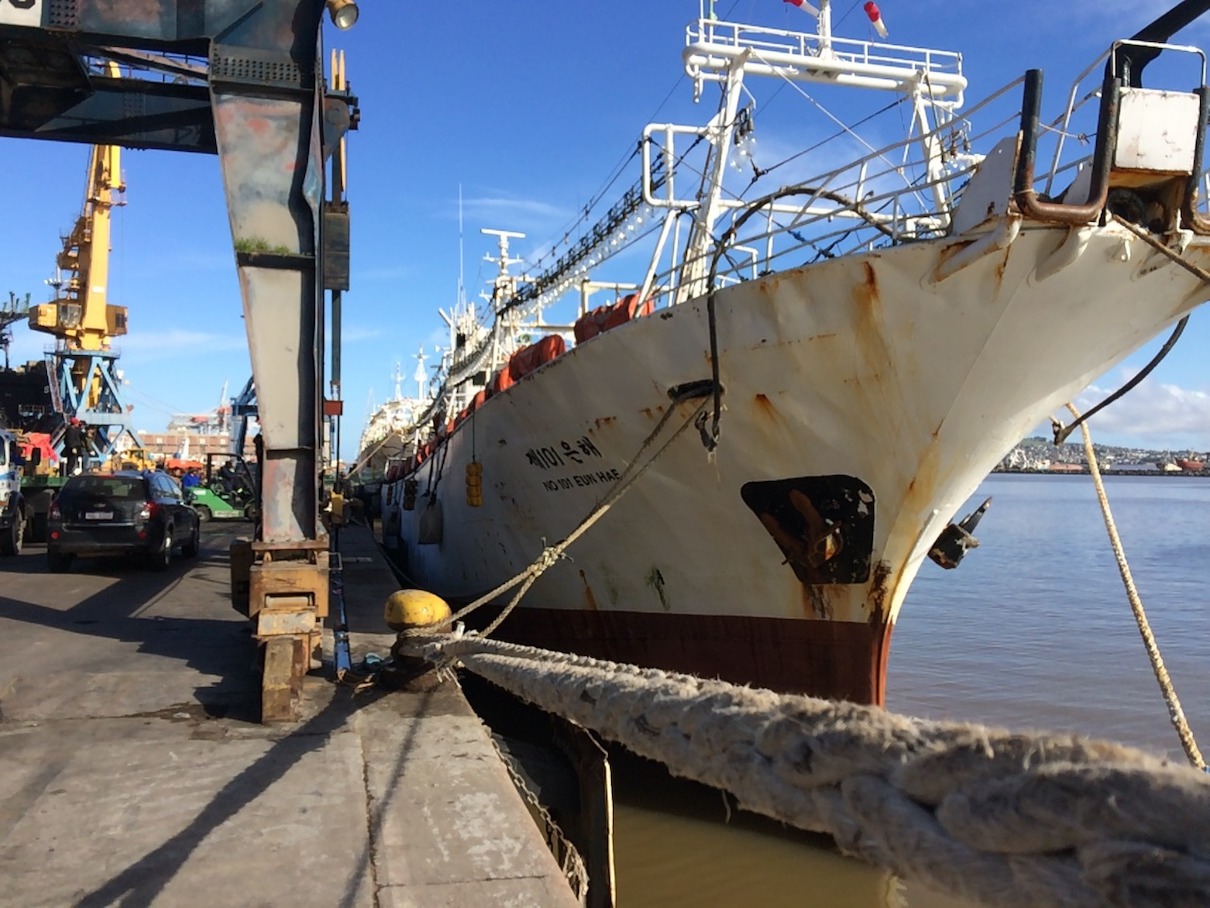 Last year, news of a fleet of about 300 Chinese fishing vessels swarming around the Galápagos Islands, possibly to fish illegally, grabbed the attention of the world.

But there’s a similar scenario playing out off the coast of Argentina: each year, hundreds of foreign-owned vessels are also traveling here to fish for species like Argentine shortfin squid (Illex argentinus) and Argentine red shrimp (Pleoticus muelleri). And now, a new report shows that many of these ships are turning off their satellite tracking systems for extended periods of time. The most likely reason, the authors say, is to avoid detection while fishing illegally within Argentina’s exclusive economic zone (EEZ), a span of ocean stretching 200 nautical miles (370 kilometers) from the nation’s shoreline.

This week, the conservation NGO Oceana published a report that revealed that 800 foreign vessels racked up a combined 900,000 hours of apparent fishing within 20 nautical miles (37 km) of Argentina’s EEZ between Jan. 1, 2018, and April 25, 2021. But over this three-and-a-half year period, there were 6,227 instances — totalling more than 600,000 additional hours — in which fishing vessels appeared to go “dark” by turning off their automatic identification systems (AIS). As the report says, instances of turning off AIS tend to suggest that vessels are trying to avoid detection while doing something illegal.

“For me, [the most alarming part] was the amount of time that the vessels were missing, when we didn’t know where they are,” Marla Valentine, the illegal fishing and transparency campaign manager for Oceana, told Mongabay in an interview. “Six hundred thousand hours — that’s just a large amount of time in which there’s no accountability for the fishing vessels in this area.”

Argentina’s commercial fishing industry constitutes 3.4% of the country’s gross domestic product and is worth about $2.7 billion. The industry is mostly driven by the catch of four species: Argentine shortfin squid, Argentine red shrimp, Argentine hake (Merluccius hubbsi), and Patagonian grenadier (Macruronus magellanicus). The shortfin squid fishery in and of itself is the second-largest in the world, generating an average of $597 million each year for South America’s economy.

Foreign vessels are not allowed to fish within Argentina’s EEZ without proper authorization, but they can legally fish beyond the EEZ in the high seas. Based on publicly available AIS records, Oceana found that 433 Chinese vessels conducted nearly 680,000 visible fishing hours between January 2018 and April 2021. About 30% of these Chinese vessels also fished around the Galápagos Islands, according to Oceana. There were also nearly 200 vessels from South Korea, Spain and Taiwan that fished for 251,000 visible hours.

Most of these vessels congregated in stretches of sea eastward from Argentina’s San Matias Gulf and San Jorge Gulf, and the majority of fishing occurred between January and May, which is the best time to catch mature shortfin squid.

Argentina’s own fishing fleet consists of 145 vessels, which conducted 9,269 visible fishing hours in the same area and during the same time period. This only constitutes about 1% of the total fishing time, according to the report.

The report shows that more than half of the foreign-owned vessels had at least one significant gap in AIS, the system that publicly broadcasts a ship’s location and helps prevent collisions. A ship’s AIS system may periodically go out due to reception issues, but these gaps tend to be “pretty short,” Valentine said. In contrast, the AIS breaches documented in the report appeared to be deliberate.

“We only considered AIS to be disabled if we couldn’t detect it for more than 24 hours,” Valentine said. “So this gives us multiple satellite passes to see whether these vessels are there or not.”

The Chinese fleet was responsible for 66% of all gap events, while Spanish vessels were responsible for 20% and South Korean ones for 8%, according to the report. While the Chinese fleet had the highest number of AIS gaps, the Spanish fleet actually had the worst AIS compliance. Overall, the Spanish vessels spent nearly twice as long with no AIS signal as they did visibly fishing. They also went dark three times as often as the Chinese vessels, despite the Spanish ships being equipped with a “stronger and more reliable type of AIS transponder” that ostensibly decreases the likelihood of lost reception, the report said. The use of AIS is also a requirement for European ships under European Union law.

“If these vessels are turning off their AIS purposely, then it’s a pretty major violation of the fishing laws in the EU,” Valentine said.

An official from the European Commission, the EU’s executive branch, said that it considers illegal, unreported, and unregulated (IUU) fishing to be a significant threat, and that the commission was committed to strengthening the protection of ecosystems.

“The EU takes IUU very seriously and thus also the issue of possible illegal activities by EU vessels, if confirmed,” the official told Mongabay in an email. “The fight against IUU fishing is on top of the Commission’s priorities, whatever form it takes.

“EU fishing vessels have an obligation for control purposes to communicate their positions to their national authorities every 2 hours,” the official added. “These messages are sent via satellite but are not publicly available, and therefore are not accessible to NGOs.”

Spain’s Ministry of Agriculture, Fisheries and Food did not respond to Mongabay’s request for comment.

In February 2019, a Spanish fishing vessel known as the Pesca Vaqueiro actually collided with a Chinese trawler. Milko Schvartzman, a leading expert on the foreign fleet that regularly visits Latin America, said the collision was likely due to the Spanish vessel not having its AIS turned on.

“Fortunately, there were no victims, but it is a clear example of what happens when AIS is not used,” Schvartzman, who works as a marine conservation specialist with the Argentine organization Circle of Environmental Policies, told Mongabay Latam in Spanish in an audio message. “The fact of not using it has a seriousness beyond illegal fishing.”

‘Hand in hand with illegal fishing’

Over the years, IUU fishing off the coast of Argentina has resulted in numerous conflicts between the Argentine Coast Guard and illegal fishing vessels, including one incident in 2016 that resulted in Argentina deliberately sinking a Chinese trawler.

Valentine said vessels that turn off their AIS can still be detected at night through the collection of infrared imagery via the satellite-mounted VIIRS sensor. This is especially the case for squid jiggers due to the bright lights they emit while fishing. However, Valentine said the VIIRS data don’t offer any conclusive evidence.

“We don’t know, based on that type of analysis, what vessels those are,” Valentine said. “Those could be Argentina’s vessels, they could be Chinese vessels, it’s hard to say.”

The Oceana report notes that 31% of the ships that went dark also visited the Port of Montevideo in neighboring Uruguay, a place known to be favored by ships partaking in illegal activities. Additionally, more than half of the vessels that had large gaps in their AIS data also engaged with other vessels at sea, possibly to transfer their catch in a process called transshipment. When transshipping occurs at sea and away from the eyes of port officials and fisheries managers, it’s less likely for vessel operators to be caught red-handed with illegally caught fish, the report said.

‘When you arrive they are no longer there’

Schvartzman said the Oceana report has great value, but that the findings do not come as a surprise since it’s well known that foreign-flagged vessels regularly turn off their AIS off the coast of Argentina to participate in illegal fishing. However, he said the report provided some compelling details about which countries the “dark” vessels originate from, the length of AIS gaps, and the number of fishing vessels that made their way to Montevideo.

“It clearly shows that it is not only the Chinese fleet that is behaving suspiciously and stealthily, but also the Spanish fleet of the European Union … [South] Korea and Taiwan,” Schvartzman said.

Sergio Almada, an official with the Argentine Naval Prefecture, the government agency responsible for protecting the country’s maritime areas, said the report shows an important link between the disabling of the AIS and suspicious behavior. However, he said the navy is still able to monitor vessels that do not have their AIS turned on.

“Satellite images are used,” Almada told Mongabay Latam in Spanish during an interview. “We have the Comisión Nacional de Actividades Espaciales, or CONAE, and we receive 25 satellite images a day … so we see that fleet theoretically in the dark.”

Almada said that when a ship is found to not have its AIS turned on, a patrol unit is sent out to the ship’s location to verify the vessel’s activity. But he says it’s difficult to catch vessels in the midst of an illegal act since the ships tend to stay close to the EEZ border, and when the coast guard eventually arrives, the ships have usually left Argentina’s territorial waters. It’s also not possible to precisely identify which ships are in the EEZ without AIS.

“We have conducted 80 arrests over 30 years, but none occurred deep inside [the EEZ],” he said. “They all occur on the edge … of the exclusive economic zone. So the coast guard goes in there, but when you arrive at the place they are no longer there.”

There could be a myriad of consequences for ongoing illegal fishing in or around the Argentine EEZ, both economic and environmental, said Valentine. The collapse of the shortfin squid fishery would be particularly detrimental, she added.

“If we have foreign vessels coming in and fishing out all of those squid, that’s a pretty serious economic detriment to the countries that would otherwise be catching those squid themselves to sell,” she said. “It’s [also] a food security issue. What are people going to eat if their squid are being fished out … [and] we have all of the animals that rely on those squid for their own food sources — migratory species like tunas and sharks.”

Oceana is calling for all countries involved in distant-water fishing to require the use of AIS. If this is already a requirement, as it is in the EU, then there needs to be better enforcement of this rule, Valentine said.

Another recommendation from the NGO is the prohibition of transshipment, the public disclosure of fishing authorization so it can be easily determined if a vessel can legally fish within an EEZ, and the release of data from vessel monitoring systems (VMS), which can also be used to track the vessels when AIS is turned off.

“It’s not just Argentina where things like this happen,” Valentine said. “This is something that we see off the coast of Africa, this is something that we see in Asia. We just chose to focus on Argentina in this particular analysis because of the news media about foreign vessel incursions in the past few years. But it is a global problem of massive fishing fleets going to relatively small areas, and just removing tons and tons and tons of marine resources.”

How insecurity affects the lives of everyone in..