How NATO's expansion could stabilise the Baltic region 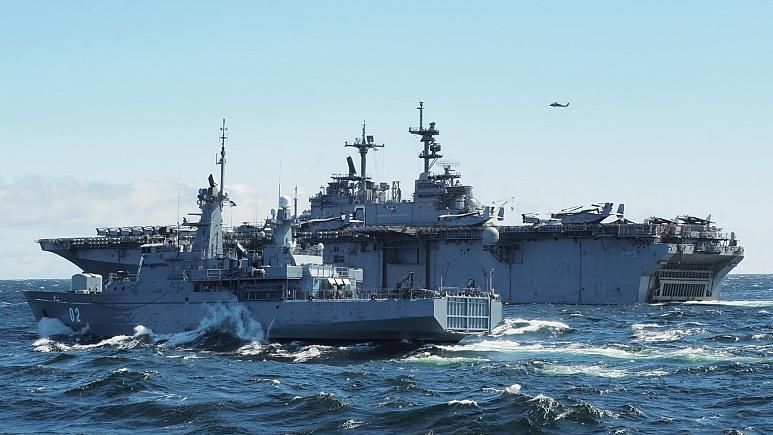 Exercise Hedgehog might have been planned long before Russian troops invaded Ukraine, but the huge war games taking place this month in Estonia are a prickly reminder of NATO readiness just 64km from the closest Russian base.

"Every prick counts, as always," one Estonian reserve soldier who is currently taking part in Exercise Hedgehog, told Euronews.

Some 15,000 NATO military personnel from 14 countries are involved in the exercise, one of the largest of its kind since Estonia gained independence for the second time, in 1991.

Offshore, there's a robust naval presence as well, with a US Navy Wasp-class amphibious assault vessel, a guided missile destroyer, and a landing ship.

Importantly, the Finnish and Swedish navies are also taking part -- a picture of what the changed security paradigm might look like in the Baltic Sea if and when both countries are admitted to NATO. The Finns are even throwing in some anti-ship missile live firing training from their south coast, in case anyone didn't get the message.

There's no doubt that the governments of the three Baltic States see the intrinsic value of having Finland and Sweden as members of NATO.

"When we see that in our neighbourhood also other democratic countries belong to NATO, it would mean that we could have broader joint exercises and also ... more defence cooperation," Estonia's Foreign Minister Eva-Maria Liimets told reporters recently.

"It would mean that we would have more robust presence of land forces, but also air and maritime defence," she added.

The Baltic Sea will soon become a NATO sea, says Glen Grant, a defence expert at the Baltic Security Foundation in Riga.

Finland and Sweden becoming part of NATO will put a few more pieces of the jigsaw puzzle in place but there also needs to be more operational coherence in the region, and the key players must also take the Baltic more seriously, Grant adds.

"NATO thinks about deterrence with extra troops and about reinforcement or regaining ground - after the event. Whilst the EU has no visible regional policy at all. Mind, I suggest that it has no proper military policy for anywhere. Who pulls the regional strings to respond coherently in the early stages of a crisis is not at all clear," says Grant, a former British military officer and Defence Attaché at the British Embassies in Helsinki and Riga.

Martin Hurt at the International Centre for Defence and Security ICDS in Tallinn explains that Moscow has certainly seen Sweden and Finland as being part of the West since the mid-90s and that in any war, they were likely to support NATO.

He also sees NATO membership for the Nordic neighbours as helping to complete the overall security picture of the region -- on land, at sea and in the air -- enhancing security in the round, an upgrade from the current situation.

"Today if we look at NATO's operation planning, we cannot rely on Sweden and Finland. In our planning, they do not exist because we cannot count on them, on using their airspace, water and land. We have to plan with what we can trust, which is our own allies," he tells Euronews.

"It would make a huge impact if especially Sweden, but also Finland, would join."

One of the key force multipliers the two applicant countries bring to the table is their naval capabilities.

Although Finland is prohibited by treaty from having submarines, Sweden does maintain its own submarine fleet. The Finns have extensive experience in minesweeper activities, and both countries have in-shore patrol boats with expertise operating in the shallow archipelago waters, strewn with thousands of tiny islands and rocky outcrops.

"In the Baltic states, the navies are relatively weak and focusing on minor countermeasures. It's not a primary war fighting capability of course. The Finnish and Swedish navies are stronger. They have extremely good quality, not good quantity, but still much more than Estonia, Latvia and Lithuania combined," explains Hurst.

That focus on Baltic naval capabilities is important because the other regional naval powers Germany, Norway and Denmark are looking towards the North Atlantic, to keep key lines of communication open rather than being available for Baltic Sea defence.

And while Poland does have a navy, the government has focused more on land and air capabilities.

"For Poland, the maritime domain has not been priority number one," says Martin Hurst.

Working with the Russians

So if the Baltic Sea becomes a de facto NATO sea, as Glen Grant says, does that squeeze the Russians with their fleets in St. Petersburg and the Kaliningrad exclave?

In military terms, there might not be much -- or any -- cooperation, but there is still regular contact in the region with Russia when it comes to maritime security and safety too.

"Of course, we have to be able to contact our neighbours in case of emergency and so far of course they are willing to make the cooperation based on maritime agreements," says Commander Mikko Simola, Head of Maritime Safety at the Finnish Border Guard Headquarters.

In the past, there have been regular exercises involving the Russians -- the most recent was in November 2021 -- to practice coordinated rescue efforts in case a passenger ship gets in distress in the Baltic Sea; and in addition to search and rescue operations, environmental cooperation in containment and clean-up operations in the event of a spill from a cargo ship.

"The connection in practice takes place between the Maritime Rescue Coordination Centre in St. Petersburg, and Helsinki on our side leading the safety operations in the Gulf of Finland," Simola tells Euronews.

So could Russia cut off this type of essential Baltic Sea contacts if they feel threatened by NATO's increased presence in the Baltic Sea? Commander Simola says he thinks this is unlikely, especially since Russia is a party to international agreements on maritime search and rescue, as well as bilateral Finnish-Russian agreements.

"I don't personally see a direct connection with joining NATO for that, " says Simola, emphasizing that the core tasks of The Finnish Border Guard, border security, maritime safety and security as well as national defense will remain as they are.

"The neighbouring regions need to cooperate if there is a need to save lives."

Reporting indicates that the MV ROWAYTON EAGLE (IMO:9575216) has been boarded 200nm off the coast..