Inside the latest mission to save migrants in the Mediterranean 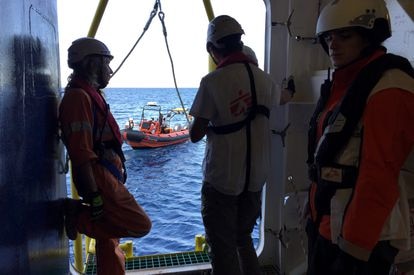 This is the time of the year when small flimsy boats, known in Spanish as pateras, try to cross the Mediterranean Sea into Europe. The central Mediterranean route is the most dangerous way to reach the continent – this year alone, 632 people have died making the crossing, according to the International Organization for Migration (IOM). Despite this, thousands of migrants who are the victims of smuggling groups risk their lives by boarding these overcrowded vessels along the coast of Libya and Tunisia in the hopes of reaching Europe. 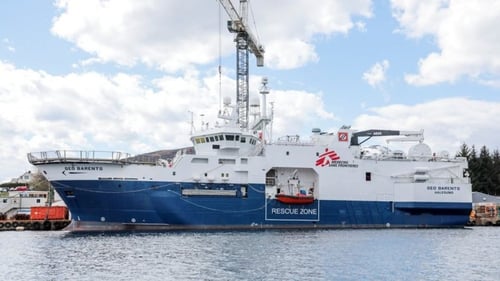 Most boat crossings happen at this time of the year to take advantage of the warm weather. But just as it is a time for crossings, it is also a time when non-for-profits like Doctors Without Borders (MSF) mobilize to save migrants from drowning at sea. This association has been working since 2015 in the Mediterranean, where it has saved 81,540 people. This year, it is returning with a new rescue ship, the Geo Barents, an enormous vessel 76.95 meters in length, carrying tons of clothes, food and medicine to help those who are rescued on the deadliest migration route to Europe.

The Geo Barents is already buzzing with activity. The ship left Alesund in Norway on May 13, and sailed the Atlantic past the northwest of Europe and the coast of France before arriving in the Spanish port of Algeciras. From there, it set out to the search and rescue (SAR) area across from the Libyan coast. The crew is taking advantage of these days of relative calm to study and go over the protocol for rescuing people at sea. The time is also being used to get familiar with the enormous ship, which once used to search for gas and oil in the Gulf of Mexico. Now its goal is to search for migrants in the vast sea.

The Geo Barents is the largest search-and-rescue ship of the six the NGO has worked with until now. It has capacity for 300 people and is carrying a ton of medicines, 1,200 blankets and 12.5 tons of food, which will allow those on board to survive for weeks in the high seas. Barbara Deck, a 33-year-old Canadian who has worked in Sudan and Syria, is leading the mission. Every morning at 8.30am on the dot, she brings together the 19-member crew – which includes doctors, cultural mediators, logistics experts and rescuers – to organize the day ahead.

If the weather is good, the team will conduct a rescue drill with two rigid-hulled inflatable boats (RHIBs). The head of the rescue operation, Ani Montes, oversees the process from the command post, where Salah Dusk, a cultural mediator who speaks Arabic, English and Norwegian is also present. There are four rescuers on each RHIB. On RHIB2, the leader instructs the others on how to keep the boat stable when the migrants are brought on board and taken to the Geo Barents. “[The migrants] go through so much misery that it is key that they feel safe,” explains Katrin Brubakk, the head of mental health for MSF. The two RHIBs – which can each carry 35 people – contain large sacks with 30 lifesaving jackets. The drill begins.

An adult-sized doll, dressed in a wet orange suit to simulate the weight of a migrant after being in the water for hours, is thrown into the sea. One of the boats speeds up and turns to rescue it as quickly as possible. On board are David Molina and Julie Melichar who lift the doll up from under its armpits to bring it onto the boat.

Once out of the water, the rescuers say it is key to maintain calm to ensure the RHIB reaches the Geo Barents without any problems. Once the boats reach either side of the ship, the rescued person must use all their remaining energy to climb up the metal ladder and onto the Geo Barents. That’s where Madeleine Habib and Ángel Sierra will be waiting, the latter tied to the ship with a harness for safety. His extended hand will likely be the first that the migrants hold as they climb on board. When the exercise is over, the team analyzes what went well and what could be improved. Everything needs to be clear, especially given that this year, the team has the added difficulty of containing a possible coronavirus infection.

Stephanie, the head of the MSF medical team who preferred not to give out her surname, is using this downtime to prepare a short course on face masks: the FPP2 for migrants; hygienic ones for surveillance rounds; and white, washable fabric for those who have just been rescued.

Meanwhile, doctor Georgina Woolveridge is explaining the long and painstaking process involved with putting on and taking off personal protective equipment (PPE), which all crew members must wear. “You have to imagine that you are covered with a liquid and you don’t want to splash anyone,” she says. Silvia Kennedy, a British nurse with experience treating coronavirus patients, also explains to the crew how to identify diseases such as scabies, which is common among migrants due to the poor conditions in which they have lived in countries such as Lybia.

The MSF team has divided the ship into three areas: red, amber and green. If someone shows symptoms compatible with Covid-19, they will be taken to an isolation area. A special room has also been set up for the rescuers to leave their clothes, which will be immediately disinfected and washed. As soon as the migrants are on the Geo Barents, doctors will take their temperature. The migrants will then be divided into two decks: one for women and children, and another for men. During the day, they can visit one another, but not at night.

So far this year, around 13,757 migrants have reached the coast of Italy, compared to 4,237 the previous year, according to the Italian Interior Ministry. “This means a rise in the number of boat crossings, but also a rise in the number of lives lost,” says Deck. It is impossible to make predictions about what will happen this summer, but it is clear that many migrants will be attempting the dangerous crossing and will be in need of rescue.