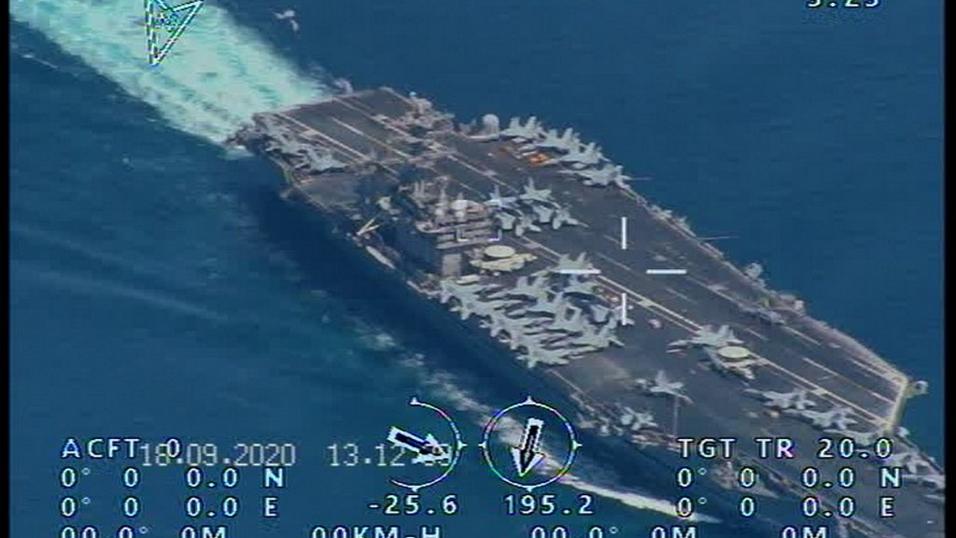 Defense Minister Benny Gantz revealed the locations of two Iranian drone bases that he said were used to conduct attacks against targets at sea in recent months.

According to Gantz, one of the sites is located in the area of Chabahar and the other is situated on Qeshm Island, just off the coast of the Iranian mainland.

“I want to stress to you that unmanned aerial vehicles are a precision weapon, which can reach strategic targets throughout the world. Most of the drone attacks that we’ve seen so far have been from southern and southeastern Iran against targets at sea,” Gantz said.

Over the past year, Israel and Iran have been engaged in something of a shadow war at sea, with Tehran allegedly conducting a number of attacks on Israeli-owned or Israeli-linked vessels sailing through the Persian Gulf and the Gulf of Oman, including one such strike in July on the Mercer Street, an oil tanker that was owned by an Israeli businessman, in which a British and a Romanian crew member were killed.

Gantz warned that Iran’s drone program was a threat not only to Israel, but to the entire region.

“We have seen the attack on Aramco, the launching of drones from Syria, the attempts by Iran to build capabilities for Hezbollah to precisely launch explosive drones at Israel,” he said, referring to a massive attack on the Saudi petroleum company Aramco in 2019 with drones and cruise missiles.

The defense minister’s remarks came less than a week before indirect talks are due to resume between Iran and the United States regarding a mutual return to the 2015 nuclear deal. Israel has staunchly advocated against an American return to the accord, which Jerusalem believes is far too weak and ultimately paves the way to an Iranian nuclear weapons. Israeli officials have instead called for a different, harsher diplomatic approach, backed up by the credible threat of a military strike on Iran’s nuclear program. The US has reportedly rejected Israel’s activities against Iranian nuclear facilities, believing such actions to be ultimately unhelpful as they only serve to encourage Tehran to upgrade those facilities in response.

“There’s no doubt that a diplomatic solution is preferable, but alongside that we need to have on the table the use of force, which is diplomacy by other means,” Gantz said, referring to a famous quote from military strategist Carl von Clausewitz.

“Sometimes the use of force, and a demonstration of it, is able to prevent the need for a stronger use of force. I thank our American allies for the sanctions and other actions they have taken recently on this front in order to reach our shared goal,” he said.

The defense minister called on the rest of the world to take a more active role in countering Iran’s efforts in the region, particularly in preventing Tehran from obtaining a nuclear weapon.

“Iran must not go nuclear. This will lead to an unmitigated spread of its terror and will even lead to an arms race in the Middle East and beyond it,” Gantz said.

Gantz’s speech on Tuesday marked the second time in recent months that he has exposed the locations of Iranian drone bases. In September, he identified an Iranian drone base in the central area of Kashan, north of the city of Isfahan, which he said was used not only by Iran but was also to train Iranian proxies.

Gantz on Tuesday also revealed that a drone launched by Iran from Syria into Israeli airspace in 2018 had not been on a direct attack mission — as had been implied — but was instead being used to ferry TNT to terrorist operatives in the West Bank.

“In February 2018, Iran launched a Shahed 141-model drone from the T4 airfield toward Israel. In that case, Iran was using the drone for something we’ve never seen before: transferring weaponry to its proxies for use in terror attacks. The UAV was launched by Iranian emissaries in Syria, carrying an explosive package of TNT, and its destination was terrorist operatives in Judea and Samaria and it was shot down by Israel near Beit She’an,” Gantz said.