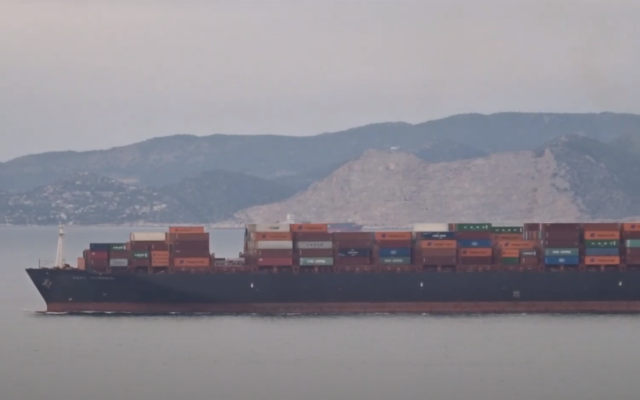 The Israeli-owned CSAV TYNDALL is seen sailing near the port of Pireas, Greece, on January 15, 2021. (Screenshot: YouTube)

A fire broke out on an Israeli-owned cargo ship in the northern Indian Ocean after it was attacked, according to multiple reports on Saturday.

The Israeli-owned ship departed from the port of Jeddah in Saudi Arabia and was headed toward the coast of the United Arab Emirates, according to the pro-Hezbollah Lebanese TV station al-Mayadeen.

An Israeli official told the Walla news site that the vessel is owned by Israeli businessman Eyal Ofer.

The cargo ship is reported to be the Liberia-flagged CSAV TYNDALL, owned by Ofer’s Zodiac Maritime, as tracking sites showed it had traveled from Jeddah to the UAE, as reported by al-Mayadeen.

None of the ship’s crew were Israeli nationals, according to the Kan public broadcaster.

Unnamed sources told al-Mayadeen that the fire aboard the vessel was caused after it was struck by an unknown weapon. 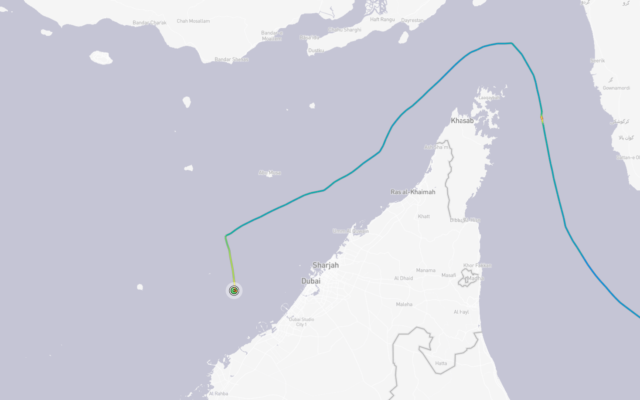 The Israeli-owned CSAV TYNDALL was sailing from Saudi Arabia to the UAE, July 3, 2021 (MarineTraffic.com screenshot)

There were no immediate reports of injuries aboard the vessel.

Israeli sources cited by local media Saturday said they suspect arch-foe Iran was behind the alleged attack, perhaps in response to the targeting of an Iranian centrifuge production site last month.

In recent months, Israel and Iran have accused each other of attacking a number of merchant ships, damaging them with explosives. The vessels in each case were only lightly damaged and there were no injuries in the incidents.

Another Israeli-owned vessel reportedly came under missile fire in the Gulf of Oman in late March, possibly by Iranian forces.

The Wall Street Journal reported in March that Israel has targeted at least 12 ships bound for Syria, most of them transporting Iranian oil, with mines and other weapons.

Saudi minister accuses Iran of being involved in..

The Saudi Minister of State for Foreign Affairs, Adel Al-Jubeir, accused Iran of being involved in..