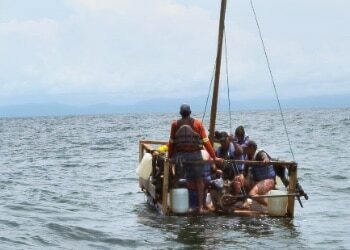 The recent dismantling of a migrant smuggling ring in Colombia has revealed the routes, corruption networks and modus operandi used to move thousands of migrants through the country.

The ten people who made up the ring are accused of smuggling migrants from Colombia’s southern border with Ecuador to Necoclí, a town on the Caribbean coast that has become a launching pad for migrants heading to Panama.

The alleged head of the ring – identified by prosecutors as Armando Wilson Meneses Tucanez, alias “Poli,” – coordinated the ring from his home, where he was on house arrest after being charged with human smuggling in 2017, according to a September 21 news release issued by Colombia’s National Police.

The arrests were made after an agent with the National Police’s Directorate of Criminal Investigation and Interpol (Dirección de Investigación Criminal e Interpol de la Policía Nacional – Dijin) managed to infiltrate the network by posing as a Cuban migrant. The undercover agent was then able to identify members of a criminal group known as Los Errantes. The United States Diplomatic Security Service also supported the operation.

According to the authorities, the migrants were charged large sums and were exposed to various forms of abuse, such as having their passports or belongings confiscated and being locked up in hotels.

The smuggled migrants – who numbered more than 1,500 – reportedly came from many different nations, but most notably of Haitian, African and Asian descent.

Most reportedly started their journeys in Ecuador before crossing the border into Colombia via the Ipiales municipality in the southern Nariño department.  Then, for about 250 days, the migrants were smuggled along a route connecting Ipiales, Bogotá, Medellín and the Caribbean coastal town of Necoclí.

According to police, corrupt officials secured false documents for the migrant-smuggling ring. The group also housed migrants in Indigenous reserves in Nariño. It remains unclear whether these communities were aware of the group’s activities.

As Colombia sees a surge in migrants journeying toward North America, it makes sense that smuggling groups would attempt to profit from the situation.

Colombia serves as a transit nation for many migrants looking to reach the United States or Canada. In August, Colombia’s migration office reported more than 32,000 undocumented migrants within the country.

Migrants unable to legally reach Colombia often arrive in Ecuador. They then cross the porous border between Carchi, a northern province of Ecuador, and the Colombian border department of Nariño. Smuggling groups are known to be present on both sides of the border.

According to the Colombian Attorney General’s Office, criminal groups charge $30-40 per person, and $10 for each piece of luggage, and as much as $65 for fake documents, such as ID cards or visas.

Once the migrants are in Colombia, they are moved by land routes to Urabá, a region that borders the Caribbean. Boat transports in beach towns such as Necoclí and Capurganá then move people toward the Darién Gap, where they launch an eight-day journey on foot through the dangerous jungle region bordering Panama.

Migrants crossing the Darien Gap risk falling victim to extortion, human trafficking and sexual abuse in a region controlled by criminal groups. The bodies of 41 migrants have been found this year along the route used to travel between Colombia and Panama.

Despite these risks, authorities estimate that up to 650 migrants venture across the Darién Gap daily.

The ring’s smuggling methods appear to have been typical, save for its use of Indigenous reserves to hide migrants and evade authorities.

Criminals in Colombia are known to try and take advantage of the complex relationship between national and Indigenous law enforcement and judicial systems. For example, Indigenous communities can legally deny the police entry into their territories, as they do not fall under the jurisdiction of the national police.

Nariño, where the safe houses on Indigenous lands were discovered, is home to various illegal armed actors that are known to intimidate and threaten these communities.

It’s also notable that a Colombian agent infiltrated the group, showing that authorities are clearly stepping up efforts to stop the smuggling of migrants amid their mass movement to the United States.

African Migration Trends to Watch in 2021

COVID-related border closures across Africa have disrupted the normal flow of regional migration,..

Fighting continues to escalate in the Tigray region both within Ethiopia and with neighbouring..

Violence towards refugees at Libyan detention..

Medical charity says abuse and attacks have escalated as more migrants are intercepted at sea and..