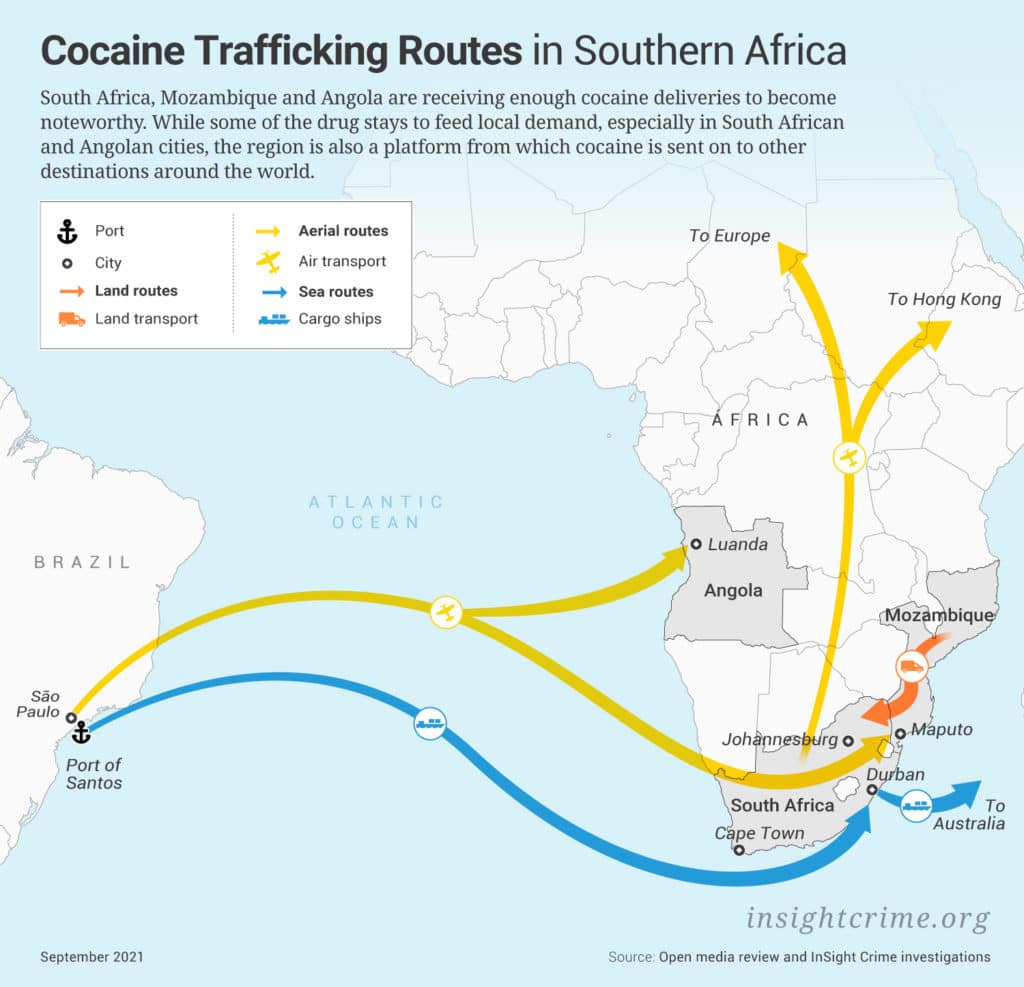 South Africa has made a rapid succession of large cocaine seizures in recent months, illuminating how the country and region now play a significant role as transit points for Latin American cocaine.

The largest such seizure came in August when police found one ton of cocaine in a shipping container at the port of Durban, sub-Saharan Africa’s largest seaport, that had arrived from Brazil’s port of Santos.

All of the drug loads traveled from the Brazilian port of Santos and all but one entered in shipping containers at Durban, according to the South African Police Service (SAPS).

Furthermore, one criminal syndicate is reportedly behind at least three of the seized shipments, though news outlets claim the group has been linked to additional shipments in South Africa and Australia.

“[M]ost of these drugs would have been destined for other countries whilst at least 20% would have remained behind as payment to the traffickers and consumption in the domestic market,” stated a SAPS press release.

Local media have identified the suspected head of the recently dismantled cocaine syndicate as an Israeli national and known fugitive with an Interpol Red Notice issued in Antwerp for cocaine trafficking. Six others are currently on trial for their supposed membership of the drug trafficking ring.

South Africa is a crucial nexus in the global cocaine trade, with a rapidly expanding domestic market, routes to destinations in Europe and emerging connections to nascent cocaine markets like Australia and Hong Kong.

“[The country] has a vibrant and extensive domestic cocaine market with numerous international, regional and domestic groups involved in its operation and distribution,” Jason Eligh, senior expert at the Global Initiative Against Transnational Organized Crime (GI-TOC), told InSight Crime.

This appears to be almost exclusively supplied – mostly in shipping containers – by Brazil's strongest criminal group, the First Capital Command (Primeiro Comando da Capital - PCC), which controls the port of Santos. The PCC has made efforts to arrange drug trafficking deals in the region, including in South Africa’s neighbor of Mozambique.

Most of the cocaine then transits onwards, however, facilitated by the country’s excellent transport infrastructure, high-level police corruption and resource shortages in the area of drug control, according to a 2019 country profile by the ENACT Africa project.

The majority goes to Europe, mostly by shipping container and, to a lesser extent, by air with individual smugglers. This represents the so-called “Southern Route” that has long exported Afghan heroin to western European seaports.

Some of the shipments head for Hong Kong, a cocaine hotspot where Latin American traffickers are aggressively attempting to grow demand. South Africa is also a primary departure point for cocaine heading to Australia, where a single kilo fetches anywhere between $90,000 and $300,000, according to the government’s latest Illicit Drugs Data Report.

Finally, as evidenced by the alleged Israeli head of the recently dismantled trafficking ring, South Africa is also a midway point in terms of criminal migration, according to Richard Chelin, Senior Researcher at the Africa-focused Institute for Security Studies.

“[It] is a prominent settlement destination for foreign criminal actors, particularly from Nigeria, China, Pakistan, Israel and Southern and Eastern European nations,” he told InSight Crime.

Particularly important are Serbian traffickers, who have used their strong presence in both South Africa and Brazil’s port of Santos to import cocaine for domestic distribution and re-export to Australia, according to a 2020 report by the GI-TOC.

Within the span of a week, cocaine was discovered in two separate maritime cargo containers bound..

Police in Brazil have broken up a smuggling ring that had a curious modus operandi. For years, its..