By Dryad Global September 30, 2020 Maritime Security, Industry News, gulf of guinea, West Africa
Following an increase in kidnap for ransom attacks in the Gulf of Guinea beyond Nigeria’s economic zone, the Joint War Committee has redrawn the listed extended risk area in the West Africa region. 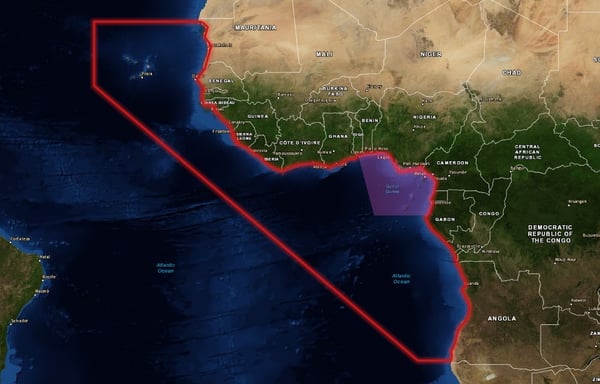 What does this mean for insurance premiums?

A change in the Listed Area allows underwriters to charge more to cover vessels that travel through the region because Shipowners who are required to sail in the Gulf of Guinea will have to obtain the approval of their insurer before they can enter these waters.

Chris Goddard is a leading underwriter of Marine War risks with Vessel Protect. He says additional premiums (AP’s) have increased in 2020 due to a proliferation of piracy in West Coast Africa in both the Marine War and Kidnap and Ransom market.

“The expansion of the Gulf of Guinea notification area is in direct response to the broadening of sustained attacks in the region which began increasing in 2019. The JWC’s decision will increase costs for shipowners operating in the region,” he added.

“However, those who widely adopt best management practice and engage in risk mitigation measures such as transit risk assessments conducted by independent maritime security experts will continue to see preferable insurance terms over their peers.”

Why has the Joint War Committee taken these steps now?

“Attacks in the extended JWC area increased from five in 2017 to 28 in 2019, with 10 of the incidents last year reported as kidnappings. Incidents in the revised area would have made up 30% of all incidents in the JWC West Africa region, had it been implemented last year.  The trend that we’ve seen emerging since 2017 coexists alongside a lack of incident reporting in the Indian Ocean. This raises significant questions over the timeliness and responsiveness of the JWC in responding to the evolving nature of the risk and in turn the perceived heightened risk across the region”.

Why have “pirates” begun operating at long range in deep waters?

There are a number of historical reports and incidents of Nigerian pirate groups operating at long range and in deep waters beyond Nigeria’s Exclusive Economic Zone (EEZ), but what’s become apparent is that their area of operations has expanded in the past year. The principle driver of such a incidents is the relative lack of effective enforcement in waters neighbouring Nigeria. In addition, pirate action groups seek to capitalise on the opportunities that lie beyond Nigeria’s EEZ where vessels are less likely to be hardened against attack and less likely to have BMP West Africa recommendations in operation. The maritime security threat within the Gulf of Guinea isn’t restricted to Nigeria’s EEZ and as the industry well knows maritime piracy doesn’t adhere to the mapping constraints of conventional national geographic and maritime borders.

Click below to receive a sample of our West Africa reporting:

*The JWC is made up of underwriters from the Lloyd’s and International Underwriting Association companies markets.