Unconfirmed media reporting has indicated that the MV HYPERION RAY (IMO9690559), has been involved in an incident off the coast of Fujairah.

The original source of information regarding the incident is understood to have originated from Hezbollah affiliated Al Mayadeen. Since the reported incident, representatives for Mr Rami Ungar (owner of RAY SHIPPING Ltd) have released a statement to the BBC stating that "the MV HYPERION RAY incurred no damage and is continuing at full speed on its original voyage." 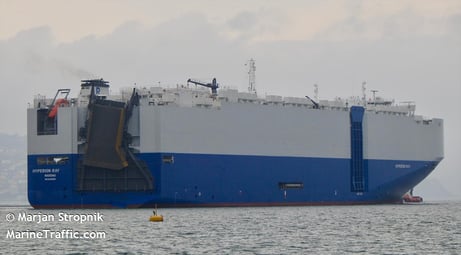 Whilst the incident remains unconfirmed, it is understood that the MV HYPERION RAY sustained an approach by two small fast attack vessels in the hours before the alleged incident. Twitter handle @AuroraIntel has provided images showing two vessels appearing in transit 2.4nm to the stern of the HYPERION RAY.

Twitter handle OSINT-1 has since provided images indicating two small vessels transiting in the immediate vicinity of the HYPERION RAY sometime later. It is understood that this action was captured by an official source operating within the area and that the small craft were seen to be alongside the HYPERION RAY for 12 seconds before departing. Unconfirmed reporting has since indicated that one of the two vessels proceeded alongside the HYPERION RAY's port side and is understood to have made contact with the vessel whilst  'attempting' to place an abject on the side of the vessel hull. It is alleged that this attempt failed and the vessels withdrew. After such time the HYPERION RAY continued on her way.

This latest incident comes in the context of increased tensions between Israel and Iran, and whilst unconfirmed this is the 5th such incident of 'tit-for-tat' between the two countries.

On the 25th of February the Israeli owned vehicle carrier HELIOS RAY suffered an explosion off the coast of Oman, for which Iran was accused of responsibility. Following this, Israel Environmental Protection Minister Gila Gamliel accused Iran of “environmental terrorism” after an Oil Spill offshore Israel on the 1st and 2nd of February. Of note, Israel's military and intelligence agencies sought to distanced themselves from Ms Gamliel remarks, with local TV reporting that the defence establishment "does not share this assessment".

Following on from the attack against the HELIOS RAY the Iranian flagged MV SHAHR E KORD suffered an explosion within a container onboard on March 11th offshore Haifa. Analysis indicates that the MV SHAHR E KORD transited through the Bab Al Mandab strait between the 2nd and 3d of March where she is assessed to have called alongside the Iranian-flagged SAVIZ. Unconfirmed reporting from Israeli Defence sources, claim that the Israeli owned containership MV LORI was then hit by a missile offshore of Oman in the Arabian Sea on March 25th, reportedly suffering minor cargo damage. This incident was closely followed by what is believed to be another reprisal attack against the MV SAVIZ on the 6th April 21.

Israel is assessed to have both the capability and intent to conduct complex maritime operations against adversaries both within littoral waters and beyond. In December the IDF Chief of Staff Kochavi speaking at the INSS Israel conference confirmed that Israel had carried out a “successful commando operation, not necessarily within the first circle of states.”. The statement was assessed to be a reference to the activities of the IDF unit Shayetete 13 and went on to be cited by a number of organisations as a potential rational for the conduct of the attack against the MV HELIOS RAY. Whilst Iran remains capable of conducting similar style attacks, there is assessed to be significantly less intent to engage in a protracted tit for tat of engagement with Israel.

The strategic context of such attacks is vital in assessing the likelihood of future activity. Whilst these attacks have involved merchant vessels, there is no indication at this stage that attacks will evolve to include wider commercial vessels unconnected with the affairs of each state. Iran and the US have begun negotiations around Iran's return to the JCPOA with Iran stating a full lifting of sanctions as a pre condition of its return. Despite this, returning to the agreement is assessed to be a significant strategic goal for Iran and its actions are likely to be framed within the context of this. Following the attack on the MV SAVIZ the Iranian foreign ministry stated that ""The incident fortunately caused no loss of lives, and technical probes are underway into how it happened and what caused it, and our country will take all necessary measures in that regard through international authorities." Iran's reference to taking counter measures via international authorities can be seen as an attempt to de-escalate the situation, albeit in the short term. Iran has limited means through which it is able to mount an effective, sustained campaign against Israeli interests and thus is forced to rely on the use of proxies and limited asymmetric attacks.

It is currently understood that at an official level, allegations of an attack against the MV HYPERION RAY have been unable to verify, and thus have not yet satisfied the burden of proof to result in a confirmation of an attack.