Unconfirmed Iranian media reporting indicates that the Iran-flagged container vessel ‘SHAHR E KORD’ has suffered an explosion whilst operating in the Eastern Mediterranean offshore Haifa. Unverified imagery appears to indicate that an explosion occurred within one or more central containers in the forward portion of the vessel. Imagery appears to show crew members with firefighting equipment, and the debris of a destroyed container. Images of the destroyed container display significant signs of overpressure and peeling indicating that it is a realistic possibility that the explosion originated from within the container. 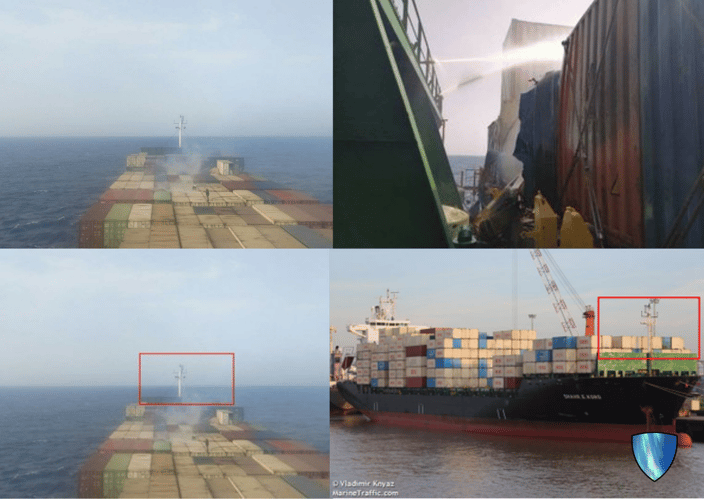 Analysis indicates that the SHAHR E KORD transited through the Bab Al Mandab strait between the 2nd and 3d of March where she is assessed to have called alongside the Iranian-flagged SAVIZ. The Iranian flagged SAVIZ continues to be suspected of involvement with IRGC operations and activity within Yemen and the wider Red Sea. After transiting through the Suez Canal SHAHR E KORD transits NE and on the 10th of March decreases her speed at 4:16 UTC, 72nm WNW of Haifa, before drastically altering her course by 180° at 4:52 UTC. She then proceeds SW at 6-7kn before altering her course again at 8:10 UTC, proceeding in her original direction resuming at a speed of 15-16kn.

This latest incident comes in the context of increased tensions between Israel and Iran following two previous maritime incidents. On the 25h of February the Israeli owned vehicle carrier HELIOS RAY suffered an explosion off the coast of Oman, for which Iran was accused of responsibility. Following this, Israel Environmental Protection Minister Gila Gamliel accused Iran of “environmental terrorism” after an Oil Spill offshore Israel on the 1st and 2nd of February. Of note, Israel's military and intelligence agencies sought to distanced themselves from Ms Gamliel remarks, with local TV reporting that the defence establishment "does not share this assessment". The validity of Iranian media claims regarding the alleged attack against the SHAHR E KORD remain uncertain at this time. Israel is assessed to have both the capability and intent to conduct complex maritime operations against adversaries both within littoral waters and beyond. In December the IDF Chief of Staff Kochavi speaking at the INSS Israel conference confirmed that Israel had carried out a “successful commando operation, not necessarily within the first circle of states.”. The statement was assessed to be a reference to the activities of the IDF unit Shayetete 13 and went on to be cited by a number of organisations as a potential rational for the conduct of the attack against the MV HELIOS RAY.