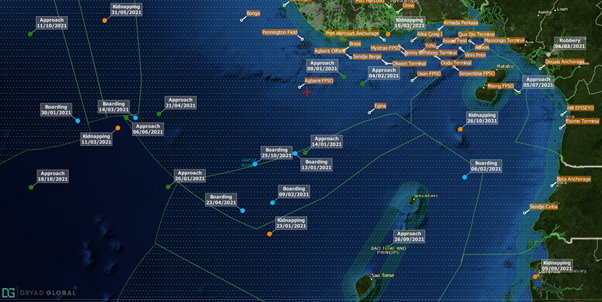 Reporting from MDAT-GoG indicates that a vessel was boarded 7nm SE Agbami Terminal.

The vessel is understood to have been inbound Lomé from Libreville when the vessel was attacked.

Later reports indicate that the vessel was approached and subsequently boarded by one skiff. The pirates are understood to have remained onboard for 30 minutes before leaving the vessel. Pirates were reported to have then sailed north.

Information regarding the welfare of the crew remains unclear however unconfirmed reporting indicated that crew may have been kidnapped. The vessel involved is understood to have previously been involved in a kidnapping incident within 2020 during which 5 crew were kidnapped. At this stage it remains unclear whether the vessel has suffered a second kidnapping of the same proportions.

MDAT-GoG has reported that a vessel has been approached whilst transiting from Lomé to Abidjan.

Reporting indicates that the MT SEAKING (IMO:9292187) was approached by a small boat launched from..