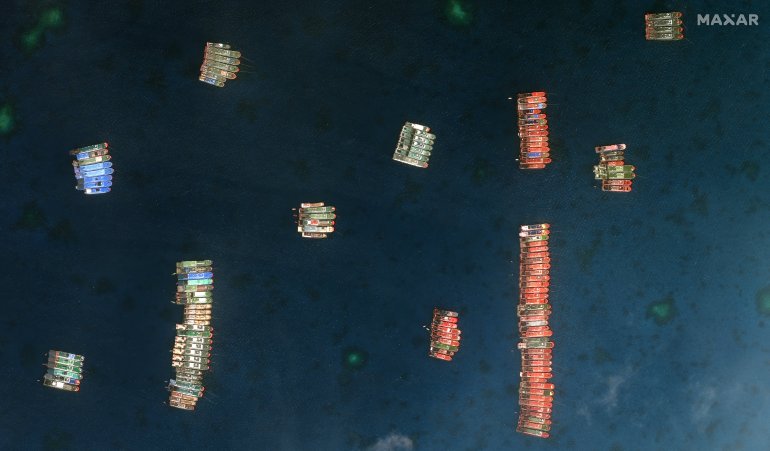 New report finds Beijing funding hundreds of vessels that it uses to back its expansive claim in the disputed waters.

There may be as many as 300 vessels from China’s maritime militia patrolling the Spratly Islands in the South China Sea at any one time as Beijing continues to stake its controversial claim on the disputed waters, according to new research from the Centre for Strategic and International Studies in the United States.

Composed of purpose-built militia vessels and commercial fishing fleets, China’s maritime militia has “exploded” in tandem with its increasingly assertive claim to almost the entire sea, CSIS said in the report, which was published on Thursday in Washington, DC.

Vietnam, the Philippines, Malaysia, Brunei and Taiwan also claim parts of the South China Sea where China has been building artificial islands with airstrips, sheltered ports and other military infrastructure.

China’s maritime militia dates back to coastal defence carried out during the 1950s. Since China seized the Paracel Islands from Vietnam in the 1970s, the militia, supported by government subsidies for fuel, construction and repairs, according to CSIS, has grown in size and scope and become instrumental in helping Beijing assert its territorial and maritime claims.

“Over the course of the 2000s, the militia shifted its focus toward surveilling and harassing foreign military activity to which Beijing objected,” the CSIS report said, citing cases of suspected militia ships ramming foreign boats, damaging their sonar array or exploration equipment, throwing debris in their path, firing water cannons, and engaging in other dangerous manoeuvrings.

Greg Poling, director of the Southeast Asia Program and the Asia Maritime Transparency Initiative at CSIS and one of the report’s authors, said there had been a clear effort to professionalise and build out the militia since president Xi Jinping came to power.

Fishing vessels of the ‘professional’ maritime militia (MMFV), operate from several ports in Hainan, an island off China’s southern coast, while the Spratlys backbone fleet (SBFV) are retrofitted fishing boats operating out of five ports in the southern province of Guangdong, he said.

“The value of the militia is because it has a degree of deniability,” Poling said. “Beijing can just claim that these are commercial actors, But remote sensing and photographic evidence can be combined to distinguish militia vessels from non-militia.”

The line between commercial and defence activities by China’s military militia can often become blurred as many vessels still engage in large-scale fishing operations while also working alongside the military or law enforcement patrols, said Collin Koh, a Research Fellow at the Institute of Defence and Strategic Studies at Nanyang Technological University in Singapore who was not involved in the CSIS report.

“Chinese maritime militia personnel don’t simply go outperforming this task full-time. They’re supposed to be ‘able to fish, and able to fight,’ to borrow what the Chinese literature on this subject has mentioned,” Koh told Al Jazeera. “This means on a daily routine, the Chinese maritime militiaman may be out there, carrying out the usual fishing activities, but this also obliges him to perform his patriotic mission at the same time.”

While most activity has avoided violent confrontation, militia tactics escalated in 2019 when a Chinese vessel collided with and then sank a wooden Filipino fishing boat anchored northeast of the Spratly Islands. The crew was left to drown before they were rescued by a nearby Vietnamese boat, according to Philippine media.

The majority of China’s militia vessels cannot be tied directly to the Chinese government through publicly available information on ownership networks, CSIS said, but they are easily identified through photos and video, data from ship-to-ship automatic identification systems, and other tell-tale behaviour like “rafting-up” by tying multiple boats together.

“There is no longer any question about whether the militia is organized, funded, and directed by the government of China,” the report said. “This makes Beijing legally responsible for its behavior. China’s domestic legislation, the public statements of PRC officials and state media, and the operational cooperation of government and militia vessels all make clear that the state endorses and facilitates the militia’s activity.”

China’s maritime militia has been described by experts as a prime example of its “grey zone” tactics to assert its claims to sovereignty in areas where there are rival claims by other countries without engaging in traditional warfare.

The militia, in turn, has also allowed China to ignore international conventions governing international waters, as well as a 2016 landmark ruling by the Permanent Court of Arbitration that dismissed Beijing’s historical claim to the South China Sea under its nine-dash line as without merit.

Ignoring the ruling, China has aggressively expanded into its “nine-dash line” and left many of its neighbours with few options to regain their territory.

“The use of such grey zone tactics poses a direct, serious challenge to a rules-based order, which sets the conditions for states to interact with each other, iron out differences as sovereign equals,” said Koh. “This means conceding to might over right, instead of the other way around. And this should be worrisome to anyone who wishes to ensure that the international system remains peaceful and stable, wherein even the smallest country can exercise strategic autonomy and acquire the deserved respect as a sovereign equal.”