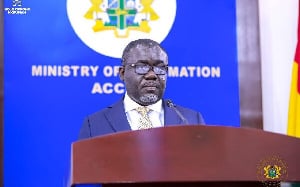 Kwaku Ofori Asiamah, the Minister of Transport, has asked West and Central African regional governments to pool resources together to fight the incessant piracy and armed robbery attacks in the regions’ waters.

Piracy and armed robbery activities in the Gulf of Guinea have become rampant over the last couple of years. According to the International Maritime Bureau (IMB), 135 maritime kidnappings were recorded in 2020 and 130 of them took place in the Gulf of Guinea.Also, in its latest global piracy report, the IMB said the region recorded 38 pirate attacks as of April 2021 and in the first three months of 2021, the IMB Piracy Reporting Centre (PRC) reported 33 vessels boarded, two attempted attacks, two vessels fired upon and one vessel hijacked, representing 43 per cent of all reported piracy incidents in the first three months of 2021.

Speaking at the opening ceremony of the 26th Meeting of the Board of Governors of the Regional Maritime University (RMU), in Accra over the weekend, Mr Asiamah said such incidents if not curtailed could greatly affect the maritime industry in the sub-region and beyond."The implications if adequately dealt with would have dire consequences to the maritime industry,” he said, adding that: “I wish, therefore, to urge members not to relent but collaborate more to bring this menace to an end.”According to data from the United Nations Office on Drugs and Crime, West Africa alone lost $2.3 billion between 2015 and 2017 due to maritime crime.

The purpose of the meeting was to solicit feedback on decisions and recommendations taken at the last meeting of the member states in August this year and to discuss the status and progress of the University and find a sustainable pathway to improve education and training at the institution.It had in attendance officials from the Gambian’s Ministry of Transport, Works and Infrastructure; Commissioner and Chief Executive Officer of the Liberia Maritime Authority and Sierra Leonean’s Ministry of Transport and Aviation, among others.

Mr Asiamah assured regional partners of the government’s commitment to strengthening its collaborations with member states to ensure enough capacities, both technical and managerial, for the maritime industry.He said the government had given roads within the University campus an asphaltic overlay to create a conducive environment for both students, lecturers and management, adding that a feasibility study to modernise and position the RMU to offer world-class education and training programmes had also been completed.He explained that a loan application of about $153 million had already been submitted to the Korean Government under the Economic Development Corporation Framework between the Government of Ghana and Korea.Under the programme, the University would be provided with a training ship to equip cadets with the requisite skills to deal with any form of threat.“The Government of Ghana believes in the right to education as a fundamental principle to socio-economic development,” Mr Asiamah said.Mr Jean Ernest Massena Ngalle Bibehe, the Chancellor and Board Chairman of the RMU, appealed to member states to honour their contribution obligations to the University on time to enable it to run effectively and efficiently.

Stakeholders in the Ghanaian Maritime Sector have called on political parties to spell out their..