Russia’s Port Sudan Naval Base: A Power Play on the Red Sea

Russia is planning to expand its naval power projection on the Red Sea. In November, Russia’s Prime Minister Mikhail Mishustin approved a draft agreement to establish a naval base in Port Sudan, on Sudan’s Red Sea coast. According to Russian state media outlet TASS, the Port Sudan logistics facility would be ‘defensive’ in nature and aimed at ‘maintaining peace and stability in the region’. The facility would also be used to carry out repairs, replenish supplies and as a resting spot for Russian navy personnel.

Although Russian officials have not commented on the Port Sudan facility’s geopolitical significance, Russia’s construction of a Red Sea base is an important landmark in its resurgence as a great power.

Russia possesses just one major naval base outside of the post-Soviet space: Tartus in Syria. This facility furthers Moscow’s vision of securing recognition as a blue-water navy and revives historical memories of the Soviet Union’s superpower status. The Soviet Union possessed naval bases in South Yemen’s capital of Aden, Berbera in Somalia and Nokra Island in Ethiopia, which provided it with footholds on the Arabian Peninsula and Horn of Africa. Even though Russia has focused on securing a favourable geostrategic position on the Mediterranean Sea since President Vladimir Putin’s visit to Libya in 2008, Moscow has eyed the Red Sea as a future theatre of power projection for over a decade. 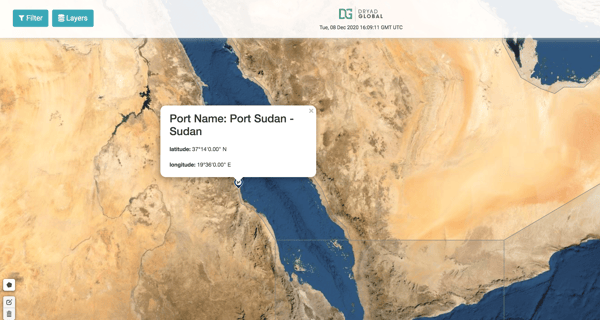 SEEKING SPOTS IN THE RED SEA

In October 2008, the head of Russia’s Federation Council, Sergei Mironov, visited Yemen and expressed support for the future construction of a base on its Red Sea coast. The instability that followed the overthrow of Yemeni President Ali Abdullah Saleh in 2012 derailed this plan and Russia redirected its focus towards constructing a facility in the Horn of Africa. In 2014, Russia engaged in negotiations to construct a naval base in Djibouti, but Djiboutian officials rebuffed Moscow’s overtures in response to US pressure. Russian Foreign Minister Sergei Lavrov held talks with Eritrean officials about constructing a logistics centre on Eritrea’s Red Sea coast in September 2018. However, no discernible progress was made on this project. As a result of these failures, Russia capitalised on Sudan’s President Omar Al-Bashir’s offer to host a naval base and continued discussions on building a Red Sea facility after Bashir’s fall from power in April 2019.

In spite of prior concerns about the poor quality of Sudan’s port facilities and a potential spillover of violence from Khartoum’s war with South Sudan, Russia sees three potential benefits from its logistics centre in Port Sudan.

First, Russia could use its facility in Sudan as a launchpad for expanded power projection on the Mediterranean Sea. An article in Russian newspaper RBC opined that Russia’s naval base in Sudan would enhance its access to trade that passes through the Suez Canal, which links the Mediterranean to the Red Sea. Yuri Lyamin, a Moscow-based defence expert, argued that Russia’s Port Sudan facility would alleviate the resupply commitments assumed by Tartus. This would help Tartus complete its transition from a resupply facility to multi-purpose naval base, which Russia announced as a key objective in May.

Second, Russia will use its Port Sudan facility to bolster its credibility as a bulwark against maritime security threats in the Red Sea and Indian Ocean. Russia’s naval doctrine lists piracy in the Indian Ocean, alongside the Gulf of Guinea and Pacific Ocean, as a critical security threat. In October 2008, Russia deployed the Neustrashimy frigate to the Gulf of Aden, which worked with the UK’s HMS Cumberland to fend off Somali pirates on 12 November. The May 2010 hijacking of the MV Moscow University tanker off the Gulf of Aden underscored the potential for Somali pirates to threaten Russian nationals. Although Russia has relied over the past decade on the US and China to secure the Red Sea from piracy, the Kremlin can use its base in Port Sudan to play a more proactive role in combatting pirates. Also, as Russia cooperates with Saudi Arabia on stabilising world oil prices via OPEC+, it does not want non-state actors, such as Yemen’s Houthi rebels or Al-Shabaab, to disrupt the daily passage of 4.7 million barrels of oil through the Bab El-Mandeb Strait.

Third, Russia will use its new logistics facility to protect its investments in Sudan and consolidate its bilateral partnership with Khartoum. Russia has consistently supplied more than 80% of Sudan’s weapons since 2003, and the Wagner Group has also deployed private military contractors to Sudan since 2018. These contractors were officially tasked with guarding Sudanese gold mines operated by M-Invest (which is linked to Wagner Group owner Yevgeny Prigozhin), but remain illegal under current Russian statutes. Anton Mardasov, an expert on Middle East affairs, believes that Russia’s Port Sudan facility will allow it to ‘legalise’ its military presence in Sudan. This will help Russia augment the security of its gold mining assets and transit from a transactional relationship with Sudan based on arms sales to a more comprehensive security partnership.

In light of these benefits, Russia’s reassertion as a naval power on the Red Sea has significant geopolitical implications. The US, the EU and Turkey likely view Russia’s presence in Port Sudan as a challenge to their interests. After Vladimir Putin formally approved the Port Sudan facility’s construction, the former commander of Russia’s Black Sea fleet Vladimir Komoedov warned that the naval base aimed to challenge the supremacy of the US on the Indian Ocean. As the EU Naval Force Atalanta (EU NAVFOR) anti-piracy mission is set to expire at the end of December, Russia’s Sudan-based warships could supplant European anti-piracy initiatives.

Russia’s new logistics facility also presents a long-term challenge to Turkey’s interests in Sudan. After a December 2017 meeting between Turkish President Recep Tayyip Erdogan and Omar Al-Bashir, Turkey agreed to spearhead the reconstruction of Suakin Island, which is located on Sudan’s Red Sea coast. This announcement fuelled speculation that Turkey planned to construct a military base on Suakin Island. Cognisant of this prospect, Vladimir Mukhin, a columnist for Nezavisimaya Gazeta, opined that Russia competes with Turkey in Sudan and will use its Port Sudan base to counteract Ankara’s $650 million investments in Suakin Island.

In contrast to the trepidations in Washington, Brussels and Ankara, Russia’s Port Sudan logistics centre construction has been warmly greeted in Beijing. Chinese media outlets have interpreted Sudan’s acceptance of a Russian base as a sign of Khartoum’s willingness to combat ‘foreign interference’ from the US and France. An article in the People’s Liberation Army Daily raised doubts about Russia’s ability to help stabilise Sudan due to the coronavirus pandemic, low oil prices and an overstretched military budget, but there is some optimism that Moscow could help the Sudanese military prevent unrest.

Even though Moscow’s willingness and ability to invest in its Red Sea presence is unclear, Russia’s new Port Sudan naval facility is a landmark moment in the expansion of its naval capabilities. As Sudan edges closer to completing its fragile transition to democracy in 2022 and US–Sudan relations concomitantly thaw, Russia’s naval presence will allow it to maintain a foothold on the Red Sea that remains impervious to the winds of political change in Khartoum.

Russia and China Team Up in the Indian Ocean

The US and its allies may have military dominance in the region, but it’s no guarantee of influence.

Russia has announced it will close the strategic Kerch Strait which connects the Black Sea and Sea..

Over the last month, the shadow of Russian Foreign Minister Sergey Lavrov has loomed large across..