An oil tanker came under attack while at a Saudi Arabian terminal in the Red Sea about 125 miles north of the country’s border with Yemen, according to the vessel’s owner.

The Agrari, a so-called Aframax-class vessel able to haul about 700,000 barrels of oil, was holed about 1 meter above the waterline in the incident, a statement distributed on behalf of the carrier’s owner said. The incident took place as the ship was preparing to leave a berth at the Shuqaiq facility, having finished unloading its cargo, it said.

It wasn’t clear who launched the attack and no one claimed responsibility. A few hours after the incident, state TV reported that Saudi-led coalition forces were destroying an explosives-laden boat and a commercial vessel was damaged in the process.

The incident wasn’t at a crude oil export facility and will almost certainly have zero effect Saudi Arabia’s capacity to produce or export oil. It follows a separate low-level attack on Monday, in which Yemen’s Houthis fired a missile at a Saudi Aramco fuel depot in Jeddah, the kingdom’s second-biggest city. The resulting blaze was extinguished in 40 minutes.

Houthi officials didn’t acknowledge involvement, or offer an account of what might have happened to the Agrari.

“There’s definitely an uptick of attacks from the Yemen side of the border onto Saudi Arabia to try and attempt to send a signal that it’s not just in the Strait of Hormuz and in the Persian Gulf that Iran has the ability to undermine Saudi oil interests and naval activities,” said Ayham Kamel, head of Middle East and North Africa at Eurasia Group, which advises clients on political risk. 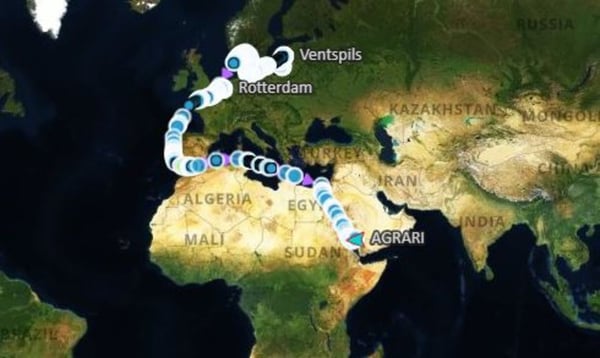 The Agrari appears to have been delivering fuel oil from Europe, according to shipping data compiled by Bloomberg. Crew on the Agrari are safe, no pollution has been reported, and the tanker itself is stable, according to the statement, which was distributed by MTI Network for TMS Tankers Ltd.

There have been signs of the ongoing tension between Yemen and Saudi Arabia in recent days. A Saudi-led coalition fighting Iran-backed Houthi rebels in Yemen said Tuesday they destroyed five Houthi mines in the Red Sea, according to Saudi state-run Al-Ekhbariya TV. The mines were Iranian made, the coalition report said. It said the “hostile Houthi actions supported by Iran threaten maritime security.”

The vessel has been boarded by local authorities, including the Coast Guard and an investigation is under way.

“At this stage we don’t know if this is a case of a sea mine striking the vessel or whether this is a direct attack,” said Munro Anderson, a partner at maritime security firm Dryad Global, adding that there are still several of old mines present in the Red Sea. The latest event is “well within” expected risk levels for the region where it happened, he said.