Russian military aircraft have been conducting combat exercises in the skies above the Black Sea, where the US and other partner militaries are conducting a large exercise involving dozens of ships and thousands of troops. The exercise will end on July 10th.

Black Sea Fleet Su-30SM fighters and Su-24M bombers as well as Southern Military District Su-27 fighters and Su-34 fighter bombers practiced "missile and bomb attacks on vessels of a notional enemy" in the air above the Black Sea, the Russian military said in a statement on Saturday, according to the state-run Tass News Agency. 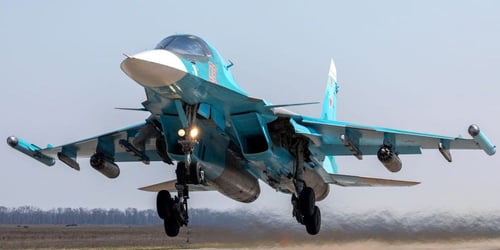 The target vessels for the exercises were two landing ships, the Saratov and the Orsk.

The Russian military training took place amid Sea Breeze 2021, a multinational exercise led by the US and Ukraine that includes 5,000 troops, 32 ships, and 40 aircraft from 32 countries. The annual exercise, the largest iteration since it was first held in 1997, began last Monday despite Russian opposition and is expected to run through July 10.

The start of the large multinational exercise came just a few days after multiple incidents in the Black Sea involving British and Dutch warships and the Russian military. Once of the incidents is said to have involved simulated attacks.

The Dutch defense ministry said last week that the "Russian military jets caused a dangerous situation in the Black Sea" on June 24 by repeatedly flying low and close to the Royal Netherlands Navy frigate HNLMS Eversten and conducting mock attacks.

The Dutch vessel also experienced  jamming that disrupted some of its onboard electronic systems, the defense ministry said.

The ship's commanding officer said in a statement that the Eversten was sailing in international waters, arguing that there was no reason for the observed Russian actions, which he called "irresponsible and unsafe."

Why the U.S. Navy Is Hunting Pirates Off of Africa

The Hershel “Woody” Williams, a massive warship the U.S. Navy calls an “expeditionary sea base,” is..