The Indian Ocean HRA- Are the additional security costs warranted?

The reduction in size of the HRA  2015 and 2019 precipitated resistance from entities that benefit from it, with objections based on the premise that the risks to shipping remain. This assertion represents the status-quo which should be challenged along with the costs associated with additional war risk insurance premiums and armed guard placements.

The Maritime industry can operate securely in the Indian Ocean without the additional costs by continuing the positive trend of effective implementation of BMP supported by investment in multi-national coordination of naval assets and capacity building of littoral states.

Security environments change, which is why it is essential that they are monitored continuously. The specialism required to do this well is not easily grown within organisations and is costly which is why we believe that security advice has to be high quality and impartial.

Dryad has created its processes by leveraging decades of experience gained in the intelligence and maritime industry and we do constantly assert our neutral position. We believe it is far better to define the risk individually than apply the same risk profile to all operations and have to bear the costs associated with slow-to-evolve or legacy risk and insurance premium models.

The reduction of the Indian Ocean High Risk Area (HRA) on 1 May 2019 was a significant event. This was the second reduction of the HRA and the first since October 2015. Set against the backdrop of a considerable and dramatic downturn in traditional maritime incidents, and a rapidly diminishing threat of piracy within the Indian Ocean, the ongoing legitimacy of the HRA remains debatable.

Without question, the implementation of the HRA led to a coordinated and effective response to the problem of Indian Ocean piracy. Measures adopted include the use of Best Management Practice (BMP), military escorts for vessels, and private military contractors. However, it is equally important to note that the creation of the HRA has led to a number of unintended consequences for littoral states and the wider shipping market.

Following the definition of the HRA within BMP3 in June 2010, and the subsequent extension of the Joint War Risks Committee (JWRC) designated area to the Western Coast of India in December 2010, the whole of the Indian Ocean, including significant trading areas along India’s west coast, Africa’s east coast and key southern and western Gulf States, was brought into an exclusion zone that significantly increased shipping costs.
Many of these states, whilst understanding the need to combat piracy within the Indian Ocean, felt that the limits of the HRA were an unfair encroachment into their EEZ. Additionally, the extension meant that these areas were now excluded from the annual war risk cover, with underwriters demanding additional premiums from ship-owners and operators to provide insurance cover. The shipping industry adds this extra premium onto freight and it is eventually passed to consumers. This is a significant financial burden for the Export-Import (EXIM) trade of neighbouring states and the consumer. 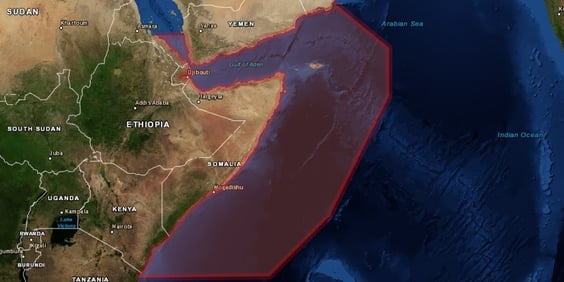 The additional economic burden imposed as a result of the wide ranging HRA has meant that Egypt and India, backed by Saudi Arabia and the League of Arab States, sought a redefinition of the boundaries of the HRA 2012. In a 2012 UN Security Council statement, the UNSC “notes the request of some Member States on the need to review the boundaries of the High Risk Area on an objective and transparent basis taking into account actual incidents of piracy, noting that the high risk area is set and defined by the insurance and maritime industry".

The unintended consequences arising out of the HRA had gained wider attention. A particular focus was the new understanding of the need to define ‘actual incidents of piracy’ and the role of the insurance and maritime sector in defining areas, as opposed to states themselves. In October 2015, the economies of Egypt, India and Saudi Arabia benefited from the lifting of the onerous insurance premiums associated with trading within the HRA; it would be another 3 years before a second such review took place.
The latest reduction in HRA size will be welcomed by global fleet owners and states previously impacted by significant EXIM costs. The latest reduction will additionally reduce the burden on trade and consumers for northern Indian Ocean states, as a result of reduced insurance premiums and consequently lower freight costs. It could, however, be argued that the most recent reduction does not fully represent an accurate appraisal of current maritime risk trends within the Indian Ocean.
Analysis of current and longer-term maritime security trends within the Indian Ocean tell a stark story; one that it is hard to reconcile with the current geographical definition and associated economic burden of operations within the HRA. At the height of Indian Ocean piracy in 2011, there were 234 attacks. The nature of these attacks covered the full spectrum of maritime crime, including incidents involving weapons, the hijack of vessels and crews being kidnapped for ransom.

Perception of Risk vs the Numbers

Since 2012 there has been a 91% fall in incidents and 70% fewer incidents since 2017. Within 2019, there were 16 maritime incidents in the Indian Ocean, 11 of which outside the HRA. Additionally, 7 of these 11 incidents were geopolitical in nature and thus unlikely to be mitigated by BMP guidelines. Four of the incidents occurred within ports.
Within the redefined HRA itself there were 5 incidents in 2019, which represents a drop of 84% when compared to 2018; all of these incidents were classified as suspicious approaches and were not confirmed as maritime security incidents.

Contributory factors to the surge in Indian Ocean piracy were systemic influences emanating from East Africa; principally, the failure of Somalia as a functioning state, and the subsequent exploitation of its territorial waters by outside parties. The view that Somalia still represents a viable risk that may precipitate a return to widespread piracy fundamentally misunderstands the complexity of risk and the forces that gave rise to piracy in the Indian Ocean.
With the economic impact of the HRA being felt at state and market level, it is vital that the process of demarcation and definition of the area is subject to continuous and robust review. Dryad assesses that this has not been the case. The observed decline in the number of maritime incidents in the Indian Ocean suggests a clear pattern where the risk to maritime operators in the Indian Ocean is being misrepresented, and the associated costs not commensurate with the actual risks to vessels. It is Dryad's view that there is a need to accurately interpret and understand the true nature of risk in the region.