Reporting indicates that a vessel has experienced an explosion whist carrying out operations within the main tanker anchorage at the Saudi Aramco Jeddah Port. This video obtained from Dryad Global's sources shows the Singaporean flagged MT BW RHINE (IMO9341940) on fire after the vessel was "hit from an external source whilst conducting discharge operations at Jeddah". 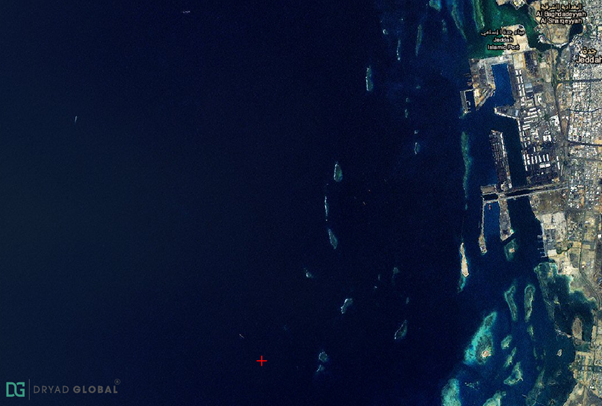 UKMTO has been informed that the Port of Jeddah is closed.

Reporting indicates that there may have been a second vessel involved, investigation is ongoing.

Currently only one vessel has been confirmed as being involved however it remains a realistic possibility that a second vessel was targeted. The Singaporean flagged MT BW RHINE (IMO9341940). A statement from the Hafnia indicates that the vessel was "his from an external source whilst conducting discharge operations at Jeddah. This resulted fire from the explosion which was extinguished with the vessel has hull damaged. All 22 crew aboard are unharmed.

Recent Red Sea activity has involved the  Maltese-flagged Crude Tanker AGRARI which was reported to have been struck by a Houthi launched Waterborne IED within the Port of Al Shuqaiq on the 23rd November 20.

On the 23rd November 20 an Aramco fuel depot was struck by Houthi Quds 2 rockets.

Specific details regarding the nature of the incident remain unclear at this time, however the credibility of source and the current cadence of activity within the Red Sea would indicate that an explosive incident is highly likely to have occurred.

Hafnia, issued the following statement confirming that it was their vessel the BW RHINE (IMO9341940) in the incident:

PRESS RELEASE No. 1 (Singapore, 14 December 2020) BW Rhine (Singapore-flagged LR1 Product tanker built-in 2008) has been hit from an external source whilst discharging at Jeddah, Saudi Arabia at approximately 00:40 local time on 14 December 2020, causing an explosion and subsequent fire onboard. The Master immediately ceased all discharge operations and enacted emergency procedures onboard. The crew have extinguished the fire with assistance from the shore fire brigade and tug boats, and all 22 seafarers have been accounted for with no injuries. Hull damage has occurred at 5P WBT (water ballast tank 5 on the port side) and 4P COT (cargo tank 4 on the port side). It is possible that some oil has escaped from the vessel, but this has not been confirmed and instrumentation currently indicates that oil levels on board are at the same level as before the incident. Cooling procedures and inerting of cargo space have been initiated to avoid reignition of fire. Ship stability is being assessed before proceeding with any further operations. BW Rhine is owned and operated by Hafnia. Hafnia has activated its shore-based emergency response team. All relevant authorities have been advised of the incident and Hafnia is working with them to ensure the ongoing security of the crew, vessel and environment.

Previous incidents have involved the use of Waterborn IED against vessels with the latest attack occurring at the Port of Al Shuqaiq on the 23rd November 20. Attempts at targeting vessels and ports via such methods are reported with relative frequency with previous reporting indicating that Saudi forces interdicted and destroyed an attempted WBIED targeting the Saudi port of Jizan on the 13th November 20.

Additional incidents have involved vessels being struck by drifting sea-mines with Saudi naval forces having reportedly destroyed Houthi and Iranian mines on the 14th and 24th November 20 respectively. In addition, such an incident was reported to have occurred against the Greek-owned, Malta-flagged Aframax tanker whilst loading at the Rudum Terminal off the Yemeni south coast on the 03 October 20.

This latest incident remains unclear however the presence of Houthi rebels offshore and 300nm north of their usual area of operations would represent a fundamental shift in both targeting capabilities and intent. If the incident is determined to be the result of malicious intent, it remains unlikely that such an incident was perpetuated by Houthi rebels targeting vessels off Jeddah with a methodology similar to that seen offshore Al Shuqaiq and Jizan. If indeed the vessel has been targeted by an explosive device it remains a realistic possibility that the vessel was targeted via the presence of limpet mines, similar to that seen deployed by Iranian forces within the Gulf of Oman in 2019.

Dryad will continue to monitor the situation and update accordingly.