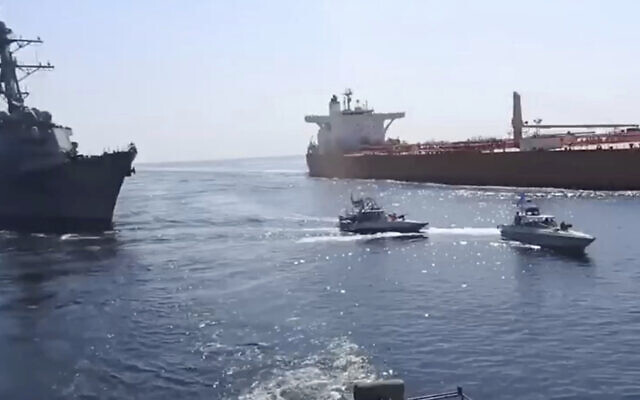 IRGC seizes vessel with over 220,000 liters of smuggled fuel in Persian Gulf, Tehran says; incident comes amid a debate about removing group from US terror list.

“Over 220,000 liters of smuggled fuel were seized and 11 foreign crew members were detained for investigation,” Ghahramani said.

Ghahramani did not specify the date the boat was seized, nor the origin of the vessel or nationality of the crew.

The Guards also captured an “Iranian boat carrying 20,000 liters of smuggled diesel, intended to supply the foreign ship” and arrested three crew members, Ghahramani added, noting the seizure was made “in the territorial waters” of Iran.

The incident comes in the wake of a series of seizures of vessels in the sea lanes serving the Gulf, where a large portion of the world’s oil is produced and shipped. 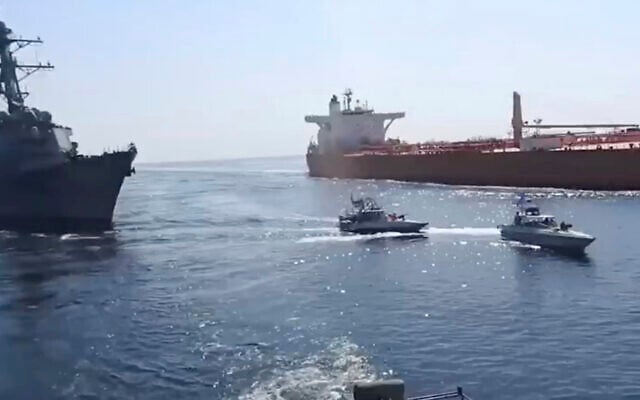 This frame grab from a video shows Iranian Revolutionary Guard speed boats, center, in front of a US warship, left, amid the seizure of a Vietnamese-flagged oil tanker, right, in the Gulf of Oman on November 3, 2021. (Revolutionary Guard via AP)

In November, Iran announced the arrest of a foreign boat carrying 150,000 liters of smuggled diesel and the arrest of 11 foreign crew members, without disclosing further details.

That seizure came days after Iran announced the release of the Vietnamese-flagged MV Sothys tanker, which they had seized in October.

The IRGC has become the center of an ongoing debate between Iran and the US as part of the negotiations for restoring the 2015 nuclear deal known as the Joint Comprehensive Plan of Action.

Tehran has demanded that the IRGC be removed from the US Foreign Terrorist Organizations list as a condition for restoring the 2015 agreement, going as far as threatening to risk negotiations as a whole.

But the US has indicated that it will not be persuaded by the Iranian demand, with The Washington Post on Saturday citing a US official saying that the Biden administration will not remove the IRGC from its terror list even if it proves to be a dealbreaker for the revival of the nuclear agreement.

Source: The Times of Israel