The importance of the Black Sea region was made obvious by the invasion of Ukraine, and the area will likely play an important role in postwar reconstruction.

The conflict in Ukraine has drawn attention to one of the most significant and yet neglected regions of Eurasia: the strategic Black Sea area at the crossroads of Europe and Asia. Despite the fact that European Union and NATO enlargement has transformed it into one of Eurasia’s key neighborhoods, until recently, the region lacked international visibility.

Russia’s invasion of Ukraine has made clear the economic relevance of the region, as well as its unexpected potential for cooperation. Both of these aspects will be crucial to rebuilding the area once the war comes to an end. Stabilization, reconstruction and regional development will likely go hand in hand in this process.

Broadly defined – using the countries belonging to the Organization of the Black Sea Economic Cooperation (BSEC) – the region comprises an area of nearly 20 million square kilometers. This includes territories of the Black Sea littoral states reaching to the Balkans and the Caucasus, and a population of some 350 million people with an estimated trade capacity of over $400 billion annually. It has substantial reserves of oil, natural gas, minerals and metals. It is also on the way to becoming one of Europe’s major energy transfer corridors.

The natural resources of the region drew public attention early once the war started – with many arguing they were one of Russia’s motivations in invading Ukraine.

The Black Sea area natural gas reserves are an excellent example of the region’s potential. While the exact volume is still undetermined, the raw estimates paint a noteworthy picture. Turkey announced in 2020 that its offshore exploration zone may hold over 400 billion cubic meters (bcm). Later it raised the estimate to 540 bcm and announced that further reserves are likely to be discovered in the remaining blocks. Ukraine estimated that the shelf it controlled prior to the war contained more than 2 trillion cubic meters. Romania’s reserves were conservatively estimated at around 200 bcm. Georgia’s offshore resources are thought to be of a similar scale, while Bulgaria’s reserves are believed to contain sufficient gas in just one of its fields to cover the country’s projected needs for more than 30 years.

When it comes to renewable energy, the Black Sea offshore wind potential is considered one of the highest in Europe. For example, Romania has assessed its current potential at around 100 gigawatts, while prewar Ukraine’s was considered to be about 10 times higher.

The agricultural resource leverage held by the region was also made obvious to all during the war. Millions of tons of flour, wheat, sunflower oil and a vast array of food and agricultural merchandise are shipped from the region to the rest of the world. That reality was under the radar of most of the commentators before the conflict. The Ukrainian grain crisis changed everything. The Russian blockade of Ukrainian grain exports cast a spotlight on the area’s importance in food supplies worldwide. 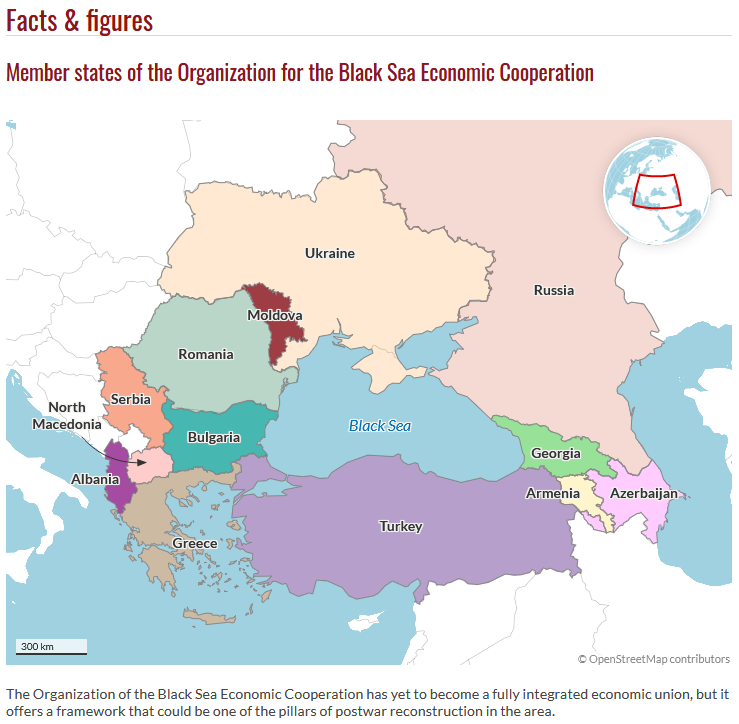 It was sufficient that about 130 cargo ships be put at standstill at the maritime border between Romania and Ukraine to send shockwaves through the global economy. The scramble ensuing to substitute Ukrainian supply lines has highlighted not only the importance of Ukrainian agriculture but also the potential and relevance of other countries in the region, many of them significant producers and exporters of food and agricultural commodities as well.

Due to transportation routes, pipelines and trade facilitation infrastructure, the region is pivotal in trade flows between east and west, and north and south in the emerging Eurasian economy. A smooth exchange of resources and goods between the Carpathians, Balkans, Urals and Caucasus is becoming increasingly important given the overall economic patterns emerging.

Finally, the sheer size of the markets in the region means its potential for growth in retail, industry and production is staggering. For instance, Turkish trade with Russia and Ukraine amounts to more than $40 billion per year. These trade flows are so crucial that not even an armed conflict could suppress them.

The Black Sea region is often perceived as a divided region, having accumulated a legacy of ancient and irreconcilable tensions rooted in complex civilizational and geopolitical cleavages. And yet, as the last nine months or so have shown, the region has demonstrated a significant potential for cooperation.

The list of humanitarian, organizational, political, social and economic initiatives – developed not only bilaterally with Ukraine but also in various multilateral arrangements – is long. The refugee crisis, for instance, was a test passed in impressive ways. These joint projects would not have been possible without complex transborder cooperation between states, agencies and civil society organizations.

One of the paradoxes of the current conflict is that the war not only highlighted the region’s potential for cooperation, but also inspired it. Despite the preconceived notions of division in the region, the Black Sea countries have demonstrated their ability to act jointly during the Ukraine crisis. Looking ahead, the years to come will reveal whether this capacity for cooperation can be channeled into mutually beneficial institutional and economic development.

When it comes to concrete action, the region will not have to start from zero to build a framework for cooperation. There is an already existing institutional and political infrastructure in place. One of the most interesting but neglected developments of the decades following the collapse of the Soviet Union was that the countries of the region tried to create and maintain an institutional structure of economic cooperation, the BSEC.

Even if the organization fell short of its declared aim, the objective as articulated by its founding document was bold and promising: “To develop comprehensive multilateral and bilateral Black Sea economic cooperation” with the view to achieving economic regionalization – a “Black Sea economic cooperation area.” Today, the BSEC is usually presented as “a project-oriented organization,” which serves as a forum for members states to cooperate on issues like transport, energy, trade, economic development, communications, education, culture, tourism, science, technology, healthcare, good governance, customs services, exploration, hydrocarbon extraction and fighting against organized crime.

In a sense, BSEC may be considered the natural institutional response to a perceived need for the countries of the region to increase their economic cooperation. Member states had a broad range of reasons to seek regional collaboration, and over the years some of these motivations have shifted. Support for membership has varied in intensity over time.

But setting aside for a moment each country’s respective motivation and incentives, the fact remains that a regional organization supporting positive regional economic development is already in place. Efforts to stabilize and develop the Black Sea region in the wake of the Russian-Ukrainian conflict could take advantage of the existing BSEC structure and capabilities.

Tomorrow at the Monaco Yacht Show, Dryad Global CEO Corey Ranslem will be presenting a seminar all..

This edition of METIS Inform is a revised issue of a piece we published in May 2021. The content of..

Why is risk intelligence crucial to route planning? In this week's vlog CEO Dryad Global Corey..