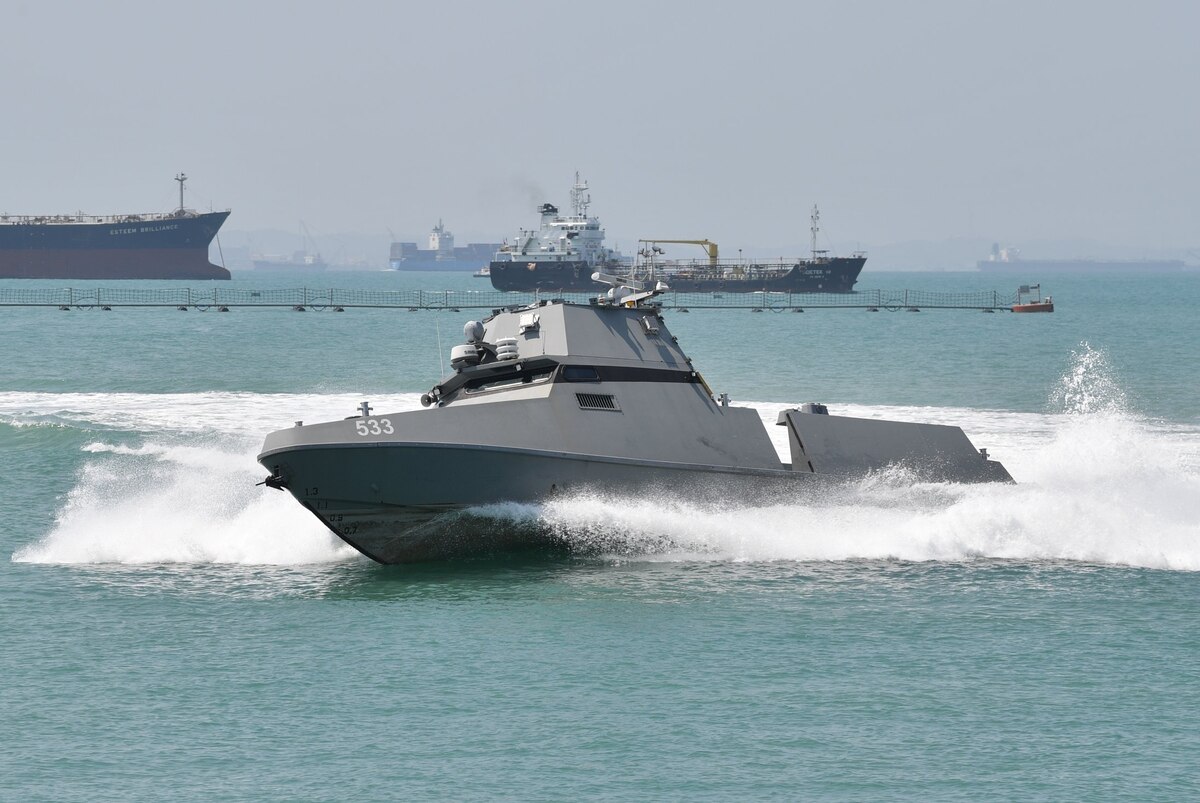 Singapore is testing unmanned surface vessels with a locally developed, AI-driven navigation algorithm that could be used for maritime security operations in the congested but strategically important waters around the southeast Asian island nation.

Upon completion, the Republic of Singapore Navy is expected to then field four USVs in the role. The country’s defense ministry said this will add another layer of surveillance and operational response for its maritime borders.

The ministry added that the vessels will be able to conduct round-the-clock patrols, providing persistence at sea. This means the navy’s larger, manned warships can be freed up and deployed more strategically for other missions.

The ministry said that the USVs are fitted with an indigenously developed collision detection and avoidance system that enables it to navigate through the busy waters around Singapore, integrating the USV’s sensors and collision detection equipment used for manned maritime navigation - such as navigation charts and Maritime Automatic Identification System - with an algorithm designed specifically for the RSN’s operations.

The system automates the collision avoidance decision-making process while ensuring that the vessels will navigate in a manner complies with the Convention on the International Regulations for Preventing Collisions at Sea, according to a news release from the ministry.

The algorithm was developed after analyzing maritime traffic patterns in the Singapore Straits and then tested in a lab environment for nine months before installation on a USV for sea trials.

Singapore has not provided details about the origin of the USV platform itself, but Janes has previously reported that the 16.9-meter-long vessel was developed by Taiwan’s Lung Teh Shipbuilding. According to specifications provided by Singapore defense ministry, the USV displaces 30 tons, has a top speed in excess of 25 knots and an endurance of 36 hours.

The USV is equipped with a 12.7mm (50-caliber) machine gun and laser dazzler, long-range acoustic device, as strobe and search lights. Navigation is aided by an on-board radar and GPS.

Singapore also announced in early February it had successfully deployed a K-STER lightweight expendable mine disposal system or EMDS off a USV and neutralized a simulated undersea mine, marking what it says was the first time this has been done in the world.

The trial carried out in late January saw the Venus 16 USV remotely navigated to the target location off Singapore’s southern islands, where it deployed the K-STER which then located the simulated mine using its on-board sensors and detonated it using a small explosive charge.

The Venus 16 is a 16-meter vessel also developed by Lung Teh with system integration carried out by Singapore’s ST Engineering.

Singapore, whose busy port and oil refineries form an integral part of its economy, sits at the southern end of the Straits of Malacca where it meets the South China Sea via the Singapore Strait, where hundreds of commercial ships carrying the bulk of the world’s maritime trade passes through daily.

This includes 80 percent of the oil headed for northeast Asia and a region where security challenges such as piracy are an ongoing problem.

The waters are also used by U.S. navy ships transiting between the Western Pacific and the Indian Ocean or Arabian Sea, with a carrier strike group centred on the aircraft carrier USS Nimitz using the Straits to return to the United States in early February.

Is an unequal balance of rich & poor driving..

There is significant wealth disparity between littoral states in the SoM&S - the GDP per capita of..