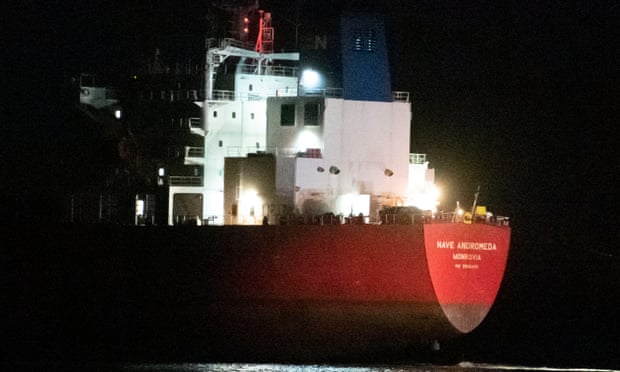 Further questions have arisen over a decision to deploy special forces against a group of seven asylum seekers accused of hijacking an oil tanker after one of them told the Guardian they only approached the ship’s crew because they believed they had been abandoned to drown.

Politicians and human rights campaigners have called for an inquiry into the incident, which happened off the coast of the Isle of Wight on 25 October, on board the Nave Andromeda, a Liberian-registered ship owned by the Greek shipping company Navios.

The supposed hijack generated international headlines and 16 members of the elite Navy force, the Special Boat Service, based only a few miles away in Poole, Dorset, were hailed as heroes for bringing the incident to a swift conclusion after they fast roped down on to the deck of the ship from helicopters while snipers in another helicopter patrolled above.

The decision to carry out the raid was authorised by the home secretary, Priti Patel, and the defence minister, Ben Wallace, who said at the time: “People are safe tonight thanks to their efforts.”

One of the stowaways, John*, who has now claimed asylum, said that on the day of the SBS raid he and the six other stowaways were locked in a cabin, as they had been for the previous 12 days since being discovered while tying themselves to the exterior of the ship.

“Everything was very quiet on the ship. We thought maybe the crew had left because the ship was sinking and they were leaving us to drown. We shouted but nobody came. We waited for many hours and then broke down the cabin door and went up on deck,” said the 27-year-old.

All seven had tied themselves to the exterior of the ship using strong ropes in the early hours of 5 October when the vessel was docked in Lagos, Nigeria.

John said before then he had been living on the streets, had been exploited by a gang and that his life had been threatened. A friend introduced him to a man who told him he could get him out of Lagos by putting him on to a ship bound for Europe and that when he reached his destination the man’s friend would meet the ship, find him work and then send his wages back to the man in Lagos to pay back his passage.

John agreed to do this.

“My childhood had been good,” he said. “Both of my parents were farmers and I went to school and always had enough to eat. But they were both killed by Boko Haram when I was still a child and I ended up on the streets in Lagos. I agreed to the man’s offer to put me on a ship because I felt I had nothing left to lose.

“The man gave us 25 litres of water and some gari [powdered cassava] to last us for a few days.”

John said that all the stowaways agreed to share the food and water equally between them, and took it in turns to sleep and watch over those who were sleeping to ensure they did not fall into the water.

They were not discovered until the ship docked in Spain where they were taken on board the ship by the captain.

“We were so happy to get on the ship. We were very tired and hungry and thirsty and needed to sleep properly,” John said.

All seven were locked in a cabin. John said the crew treated them well, bringing food and water regularly and sometimes letting them go on deck to get fresh air.

“We asked the captain many questions but he did not always answer us,” said John. “We did not know where we were sailing to and were afraid the ship had changed course and was going back to Africa. We had no phones to identify our position on the sea so had to look out of the window and guess from the weather whether we were still in Europe or back in Africa.”

He said the daily routine of crew members bringing them breakfast changed on 25 October, the day of the SBS raid.

“The captain was on the bridge but it was locked. The captain held up a piece of paper saying: ‘Stay calm the port authorities are coming to pick you up,’” said John. “We sat and waited on the deck but it got colder and colder so we went back to the cabin.”

He said all seven of the stowaways were shocked when the SBS arrived.

“They came down from the chopper like they were going to war. They had guns and they couldn’t let us look into their faces. They told us to lie belly down on the deck. There’s nobody on the planet who wouldn’t have been frightened about that.”

The SOS message sent by the ship captain reported seeing six of the stowaways going outside (on the deck): “But they cannot come inside. I try to keep them calm. I need immediately, immediately agency assistance.”

The seven stowaways were handed over to Hampshire police and were expected to be charged with hijack-related offences. Two were in fact charged with offences relating to conduct endangering ships. However, on 8 January, it emerged that no charges would proceed against the stowaways who have claimed asylum.

The Crown Prosecution Service said initial reports had indicated “a real and imminent threat” to the vessel but mobile phone footage and further evidence “could not show that the ship or the crew were threatened”.

The Home Office said it was frustrated and disappointed that the CPS decided not to bring any charges.

“At first they said we were sea pirates but there was no evidence of that,” John said. “They said we tried to hijack a ship. Such an incident didn’t happen. I’m happy we had a good crown prosecutor who went through the case properly.”

John’s claim for asylum and as a victim of trafficking is under consideration. He said: “If they take me back to Nigeria my life will be in critical danger. I will lose my life. I am a strong Christian. On my difficult journey to the UK I kept saying to myself that I had to stay positive and pass through a lot of stress to survive. For now all that matters is that I am alive.”

Ed Davey, the leader of the Liberal Democrats, said: “Ministers’ massive over-reaction was a farce. There must be a serious review into the poor judgment in this case to restore confidence in the chain of command.”

John spent more than four months locked up in immigration detention before being released into the care of the Salvation Army, which provides support for victims of trafficking.

James Wilson, acting director of the charity Detention Action, which provided support for John while he was detained, said: “This debacle raises serious questions that the government now needs to answer. The lack of a credible or verified threat is deeply concerning and the situation appears to have been badly mishandled. The public and our military deserve an urgent inquiry into how and why the home secretary took a decision to deploy elite forces against vulnerable asylum seekers to stop a hijack that never happened.”

Both the Home Office and Ministry of Defence declined to comment.

What is a stowaway? Whose responsibility are they?

The Convention on Facilitation of International Maritime Traffic, 1965, as amended, (The FAL..

The Nigerian Navy said its operatives arrested four stowaways on board a vessel at the Lagos..