The Manda Bay Forward Operations Base (FOB), which played a key role in the capture of Kismayu by the Kenya Defence Forces (KDF) in September 2012, was yesterday upgraded to a full naval base.

The FOB was crucial in planning during Operation Linda Nchi, a cross-border offensive against the Al-Shabaab who had been making regular trips into Kenyan territory and causing chaos.

While presenting the presidential and regimental colours, President Kenyatta said his government is determined to protect Kenya’s territory, explaining that the base will play a key role in achieving that. 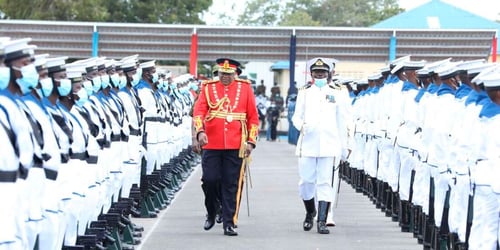 Presidential colours are the greatest honour bestowed upon a military unit in recognition of its exceptional service to the nation during peace and war time, while regimental colours is a flag bearing the symbol associated with the unit,  carried as a mark of identification.

“The purpose of the base was to provide logistics support to KDF units stationed in northern Kenya and other security agencies in the country. By elevating this FOB into a base, we hope to secure more of our maritime waters,” said the President.

The Head of State said the base is strategically located and has since 2010 been used as a launch-pad for major operations to counter terrorism and deter international crime.

The President also toured a monument and the site at the base where terrorists attacked in January last year, resulting in the deaths of three Americans and an undisclosed number of Kenyan soldiers.

Chief of Defence Forces General Robert Kibochi said the government will invest more in the base to host other national and international agencies.

In a gazette notice on Wednesday, the National Land Commission announced its intention to acquire more than 5,000 hectares in Lamu and Tana River counties for the expansion of the base.

Manda Bay, which is located within Magogoni area, will become the second naval base in Kenya after Mtongwe in Mombasa County. It was established in 1992 and was officially inaugurated in 1995.

Its main feature is the Linkspan jetty, which allows vessels to load and discharge military equipment and vehicles. It has an all-weather airstrip with night landing capability and a 1.3km runway.

It has hangers, a helipad and can handle fixed-wing cargo aircraft, including C-130 Hercules. Additional facilities include a sickbay and trauma centre that provides medical support to KDF and other personnel.

The base hosts a Multi-Agency Command Centre (MACC) established in June 2014, which comprises officers responsible for collecting intelligence.

The base has been hosting a US government Forward Operating Location since 2004 under operational control of the Combined Joint Task Force-Horn of Africa in Djibouti.

Lamu Kenya Navy Base A Big Boost For Maritime..