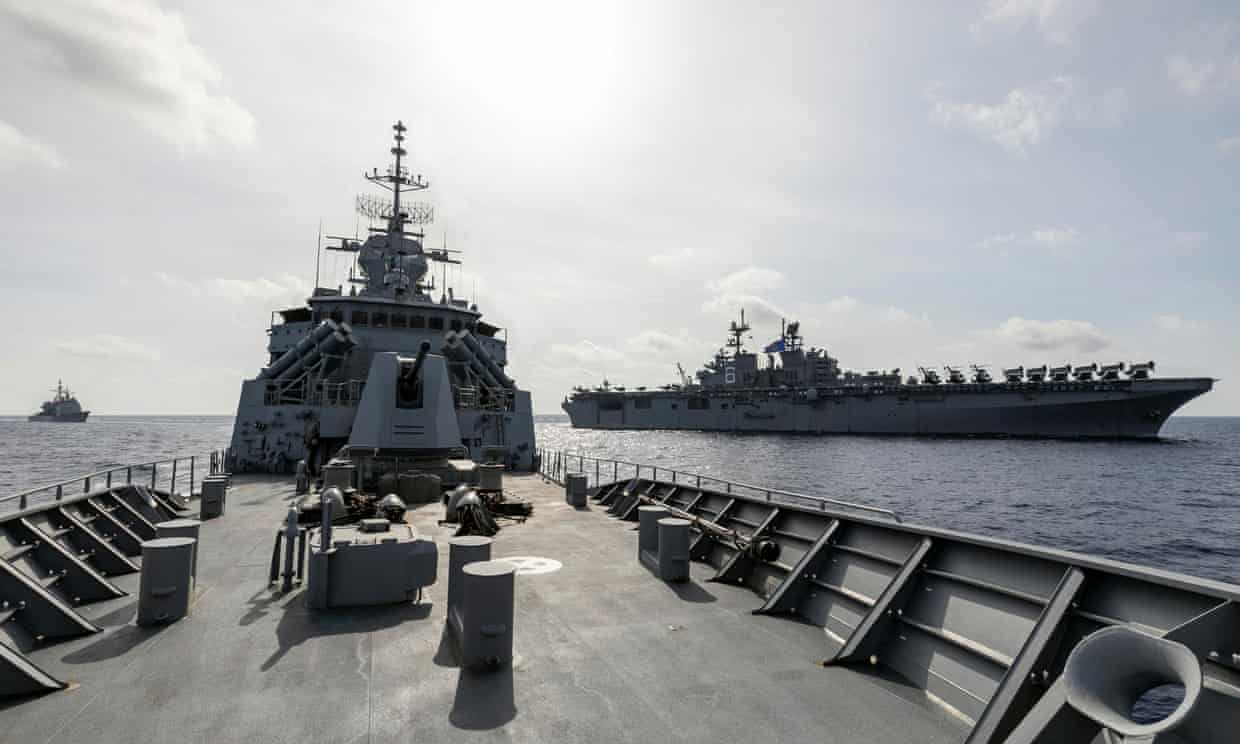 Australian military ships and aircraft will continue to patrol the South China Sea amid warnings from China that a declaration of independence by Taiwan would “mean war”.

With Taiwan reporting an increase in Chinese military aircraft in its air defence zone, and with Beijing cautioning independence forces against “playing with fire”, the Australian government is closely monitoring developments in the region.

The US military announced last weekend that a US aircraft carrier group had entered the South China Sea in a bid to promote “freedom of the seas”.

A spokesperson for the Australian Department of Defence said: “Australian vessels and aircraft will continue to exercise rights under international law to freedom of navigation and overflight, including in the South China Sea, and we support others doing the same.

“On Taiwan, we are aware of the situation and continue to monitor developments.”

The comments were in response to questions about the US aircraft carrier group’s arrival, and whether the new Biden administration had requested Australia join it in the South China Sea or whether it would carry out its own exercises soon.

The Australian government believes Australia has a substantial interest in the stability of the South China Sea, in part because of the vast volume of trade that flows through it.

While Australia routinely operates alongside the US and other partners, the government sticks to the position of not commenting on the specific details of Australian Defence Force operations.

Amid heightened tensions in the region, self-governed Taiwan has reported an increase in Chinese military aircraft in its air defence zone since last weekend.

Six such aircraft, including four J-10 fighter jets, flew close to the Taiwan-controlled Pratas Islands at the top end of the South China Sea on Thursday, according to a Reuters report that cited Taiwan’s defence ministry.

Wu Qian, a spokesperson for China’s defence ministry, said on Thursday that Taiwan was “an inalienable part of China” and the Chinese military activities in the Taiwan Strait “a solemn response to the interference of external forces and the provocations by ‘Taiwan independence’ forces”.

According to a Chinese defence ministry summary of the monthly press conference, Wu also said he wanted to warn independence forces “that those who play with fire will set themselves on fire, and seeking ‘Taiwan independence’ means nothing but war”.

It is understood the Australian government’s position is to support a peaceful resolution of differences over Taiwan and other regional issues through dialogue and without the threat or use of force or coercion.

The government also maintains that American leadership in the Indo-Pacific is welcome in order to uphold rules, norms and standards in the region.

Australia’s defence minister, Linda Reynolds, said after her first phone call with her new US counterpart, Lloyd Austin, on Wednesday that Australia and the US would “continue to work side by side with allies and partners to maintain a region that is secure, prosperous, inclusive and rules-based”.

The Pentagon issued a statement saying the US defence secretary had “emphasised the importance of maintaining a free and open Indo-Pacific, founded on existing international law and norms in a region free of malign behaviour”.

Neither the Pentagon nor Reynolds directly mentioned China, but Australia has been at odds with its largest trading partner over a range of issues including Beijing’s militarisation of disputed features in the South China Sea and crackdown on dissent in Hong Kong.

Greg Moriarty, the head of Australia’s defence department, said last month that China had acted in a “disturbing” manner and complicated Australia’s security environment through its activities in the South China Sea.

Moriarty also said a number of countries in the Indo-Pacific were deeply anxious about the future prospects for peace and stability, and the great powers to conduct themselves in a way that reassured the region.

The Australian government has been seeking a resumption of ministerial and leader-level talks with China, after Canberra’s call for a global inquiry into Covid-19 triggered a freeze in such dialogue. China subsequently targeted a range of Australian export industries with tariffs, suspensions or informal bans.

The new US president, Joe Biden, has been calling a range of world leaders since taking office last week and is expected to call the Australian prime minister, Scott Morrison, soon.

What threat does China pose within the South..