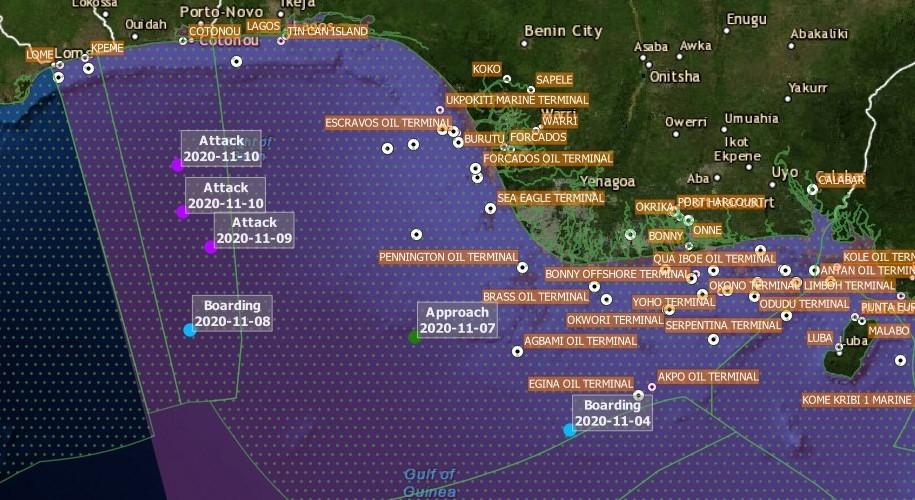 The sustained and elevated nature of the risk currently arises from several key factors. In the past 5 days there have been 6 failed attacks against vessels within two distinct areas: specifically, the waters south of Cotonou and the Southern Niger Delta. In both instances, attacks have occurred within the offshore domain at a distance of 60+nm. We've been tracking the locations of the incidents via our online platform Atlas Inform, which shows well-developed trends that strongly indicate an increase in incidents occurring beyond the Niger Delta area, the traditional heartland of piracy within the Gulf of Guinea. The incident timings and locations indicate the presence of two separate attack groupings, potentially originating from the same Pirate Action Group (PAG). 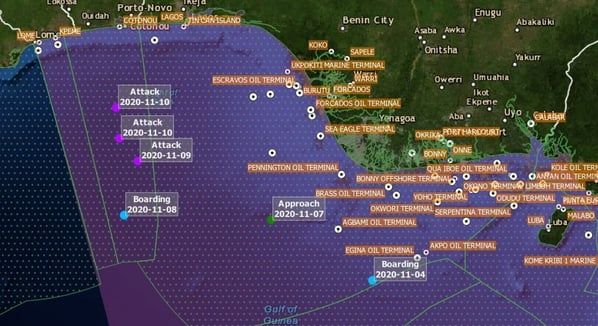 As the rate of failed attacks increases, the perpetrators are highly likely to increase in desperation. This is likely to be because of the increased risk to themselves from Naval counter piracy activity, but from logistical strain also;

The latter of which may be negated if a mothership is being used. Heightened desperation also means that attempts against vessels are highly likely to continue, further supported by a sustained period of favourable weather. Smaller vessels and those of a vulnerable design are increasingly prone to opportune targeting. Typically, vessels of this nature, particularly fishing and offshore supply vessels are less commonly targeted despite their opportunistic nature.

The uniqueness of the risk profile currently stems exclusively from the high rate of failed incidents and the sustained attempts by the pirates to secure their objective, which is highly likely to be the kidnap and ransom of crew. The relative constant threat of piracy within the Gulf of Guinea crates a heightened risk profile for maritime operations, however it remains rare for a sustained and clearly identifiable threat to exist. You can explore previous incident reporting in the Gulf of Guinea via Atlas Inform which allows you to filter by incident e.g. kidnap, boardings, burglary etc. Book a demo by clicking the button below.

It is vital that the CRITICAL risk profile is however held in context. Since 2018, while the number of incidents within the Joint War Committee HRA over the period from January to September have decreased by 4-10% each year, the number of kidnapping incidents increased by 50% from 2018-2019 and by 16% from 2019-2020. The SW Monsoon period typically ends at the beginning of September, improving the regional weather conditions in favour of pirate activity. Since 2018, our data has shown that 25% of 2018’s and 35% of 2019’s total incidents occurred in this post-SW monsoon period from September to December. In addition, incident numbers from the beginning of September to November 11 this year are tracking 10% higher than the same period in 2019 and 37% higher than that of 2018.

It is vital that all vessels operate within this area at a heightened posture maintaining the highest levels of vigilance whilst implementing full hardening / mitigation in accordance with BMP West Africa where possible. You can download a copy of the BMP West Africa, by clicking the button below: