The release of three Iranian crew members, on 20 August, marks the end of the Somali piracy era, however, seafarers still should remain vigilant in these waters, warn security experts.

Somali pirates kidnapped all 19 crew members from fishing vessel Siraj on 25 March 2015. The Iranian government rescued four crew members in November 2015, while several others were released over the years. The final three crew members were the last remaining maritime hostages being held captive in Somalia. 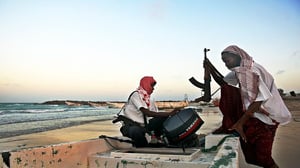 Somalia was the global hotspot for piracy between 2007-2012. During the period 2010-2013 Somali pirates held an estimated 3000 personnel linked to incidents involving vessels, according to Dryad Global, a maritime security consultancy. In 2011, the International Maritime Bureau (IMB) reported Somali pirates were responsible for 237 maritime attacks that year. However, over the last five years, maritime incidents in the Gulf of Aden have decreased significantly. “One thing is clear, is that incidents of maritime security concern [in the region] are approximately 95% lower than they were at their peak,” Munro Anderson, partner, Dryad Global, commented to SAS.

This is due in part to the publication of Best Management Practices for Protection against Somalia Based Piracy 4 (BMP4) booklet, in August 2011. It established the high risk area coordinates in the Gulf of Aden, safe vessel speeds, and the use of private maritime security contractors (or armed guards) onboard.

While the maritime industry has celebrated the fact Somalia is no longer a piracy hotspot, there are still a number of security risks bubbling under the surface. Steed warned that there is evidence of ships slipping in their duties, sailing too close to the coast, and at slower speeds than stated in the BMP4. He specified that the key pirate leaders are still in place and possess adequate funding to carry out operations. Munro concurred with Steed, stating that despite the sense that Somali piracy is now a “thing of the past” there is a degree of localised security risk remains.

There were concerns that Somali pirates were becoming active again with news of the boarding of chemical tanker, AEGEAN II, on 20 August. However, this turned out not to be a piracy attack, but a police boarding.

Despite this mistaken case of piracy, security experts agree that crew should remain alert. “Piracy is suppressed for the time being but could easily come back if the conditions are right,” concluded Steed.