Arab News - Dozens of Iranian boats were allegedly spotted crossing into Yemeni waters 9 miles west of Socotra in the latest of a series of violations of fishing rights.

Yemen has long accused the Iranians of overfishing its waters, harrying Yemeni fishermen, and transferring shipments of advanced weapons to the Iran-backed Houthis.

Since 2015, when the Yemeni coastguard authority crumbled during the early days of Houthi military expansion in the country, the internationally recognized government has been calling for global pressure over the maritime issues.

In 2016, Yemen seized 107 Iranian fishermen on dozens of boats while illegally operating near the island of Socotra.

Meanwhile, Yemeni parties and ministers on Monday condemned a Houthi attack on the house of a legislator in Sanaa. Armed militia stormed the home of Abdulrazag Al-Hajiri, a member of parliament who deserted Sanaa after the Houthi coup, terrorizing his family and vandalizing property. 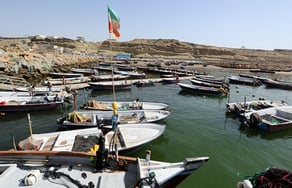 Yemen’s National Alliance of Political Parties and Force, which is opposed to the Iran-backed Houthis, said the raid was the latest attack by the group on Yemeni politicians and legislators who backed the internationally recognized government.

“Those reckless acts are terrorism, a systematic violence, evidence that the Houthi militia does not value the traditions of Yemeni society,” the alliance said in the statement, adding that UN special envoy for Yemen, Martin Griffiths, should include demands for the return of seized properties in Sanaa to their owners in the current peace discussions.

Yemen’s Ministry of Human Rights also condemned the raid on the house and the displacement of the legislator’s family, describing it as “a coward act.”

In a statement carried by the official Saba News Agency, the ministry said: “These practices confirm that the militia does not respect private property rights and carries out racist practices against the Yemeni people.”

The Houthis have intensified a crackdown against Yemeni figures who opposed their coup and have put on trial in absentia dozens of politicians, legislators, and military commanders while seizing their properties in areas under their control.

Early this year, the Yemeni parliament speaker, Sultan Al-Barkani, said that the Houthis had sentenced 35 MPs to death and confiscated their properties in Sanaa and other areas in northern Yemen.

Fighting continued on Monday in Al-Bayda, Al-Dhale, Marib, and Sanaa with Yemen’s Defense Ministry reporting that five Houthis were killed and several others injured when army troops pushed back an attack in Moures, north of the southern province of Al-Dhale.

The conflict in Yemen began when the Houthis seized control of the capital in late 2014, forcing the government into regrouping in Aden and other provinces before reversing Houthi gains with military support from the Saudi-led coalition.